If you are an avid gardener, you know that spinach is an easy-to-grow vegetable to have around. It is less demanding and requires no special care.

However, did you know you could grow various other plants and vegetables alongside your spinach? This practice enables it to grow fast and protects it from pest infestations.

Let’s get down to some companion plants for spinach and how to grow them.

Spinach is native to Persia and a member of the Amaranth family. It’s a hardy leafy green vegetable best planted in early spring.

You can also plant it during fall or winter in specific areas. Gardeners love it because of its versatility and rich source of nutrients.

Spinach prefers partial shade in warm climates. Plant them in well-drained loamy soils that are rich in organic content. 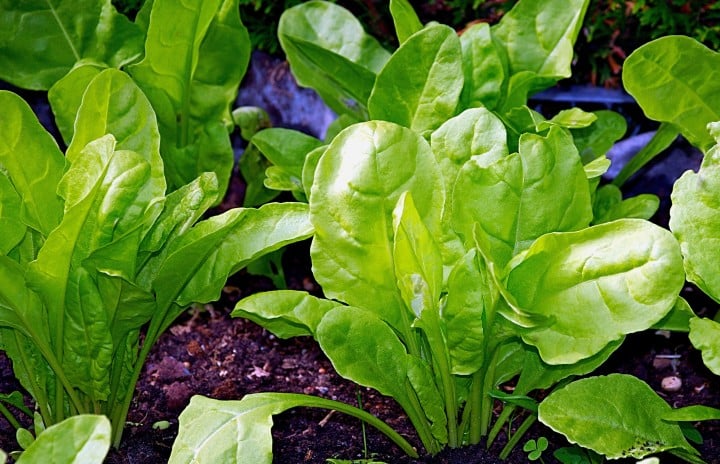 Some Reasons For Spinach Companion Planting

Spinach tastes better when you plant it with specific plants. This is because they add minerals to the soil, boosting the growth and flavor of your spinach.

Companions help reduce disease spread. Growing spinach alone in your garden is a recipe for pest and disease invasion.

Companion plants attract or repel the pest and diseases, saving you from the resultant loss.

Like any other vegetable, planting spinach involves separation into rows and columns. Unfortunately, that leaves your garden with lots of unutilized space.

However, planting companion plants will help you use the space available in total.

Some plants catalyze the healthy growth of spinach by adding helpful nutrients to the soil. Your spinach grows healthier and stronger as a result.

This is best done at the sprouting stage.

Notably, spinach is also beneficial to its companion plants. This is because its roots produce the compound Saponin.

Saponin has antifungal and antibacterial properties that protect spinach and its companion plants.

It turns out that spinach has a broad range of companion plants. So rather than focusing on individual plants, we prefer giving you a detailed list of these plant groups.

So let’s get down to the list and see what is in store for you. 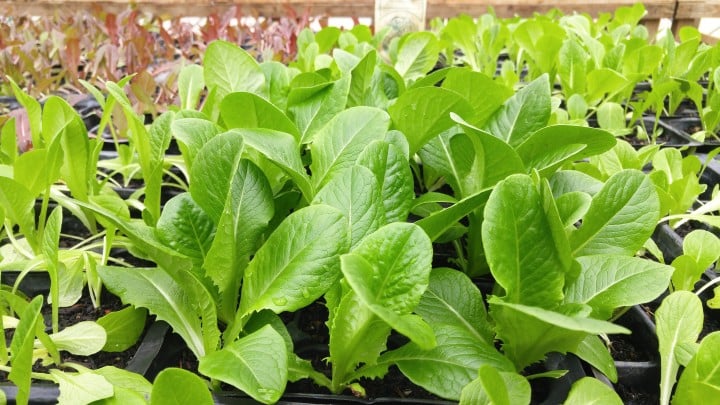 Most leafy vegetables can grow well besides spinach.

However, not all leafy vegetables are beneficial. Some consume plant nutrients from the soil more rapidly than spinach.

It’s better to grow only those that don’t compete. Several leafy green vegetables fit well in this criteria.

Some to consider are

These vegetables also protect against pests and diseases. Having them around your garden makes your spinach experience fewer cases of disease spread.

The leafy plants will also attract bugs away from the plant.

Brassicas belonging to the mustard family, is the other plant group you want to consider growing alongside spinach.

The two plants are comfortable growing together and won’t compete for nutrients. They absorb nutrients at a slower pace.

The brassicas you can grow with your spinach include: 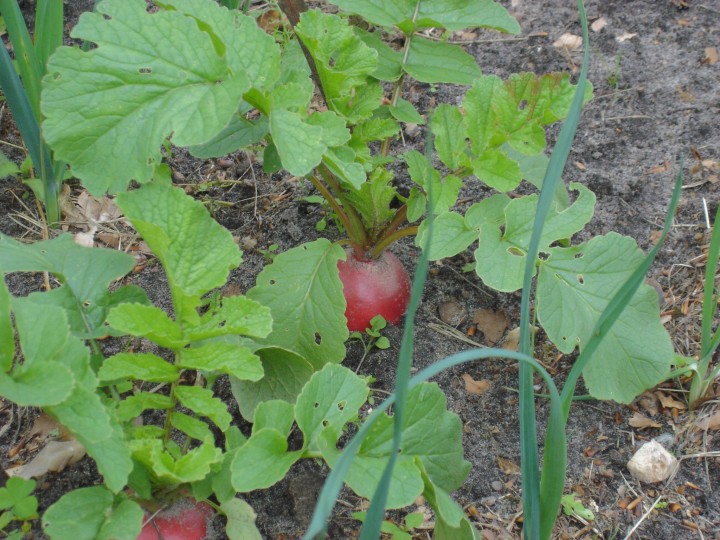 Radishes stand out amongst brassicas. This is because the plant traps leaf miners which could severely damage your spinach plantation.

Interestingly the damage to radishes is only limited to their foliage. Besides, radish is a rapid maturing plant, giving leaf miners a small window of opportunity to attack.

Some other brassicas you can add to the list for planting alongside spinach are: 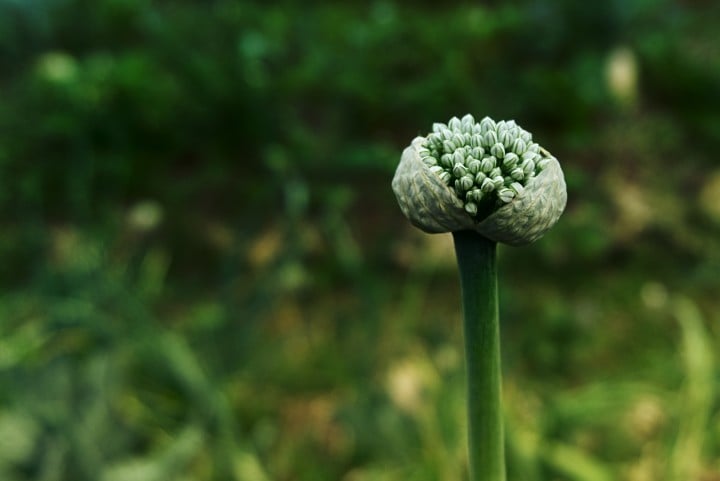 Another group of plants that make good neighbors to spinach is the alliums. Among the numerous benefits they bring, one that stands out is their ability to deter pests.

A typical example is the garlic plant. Garlic repels several insects in the garden, including aphids, spider mites, and flea beetles.

Garlic is also known for accumulating sulfur which is responsible for fighting fungal diseases.

Therefore, the sulfur in garlic and the saponin in spinach make an excellent match for preventing diseases in your garden.

Here are other plants of the allium family that make good companions: 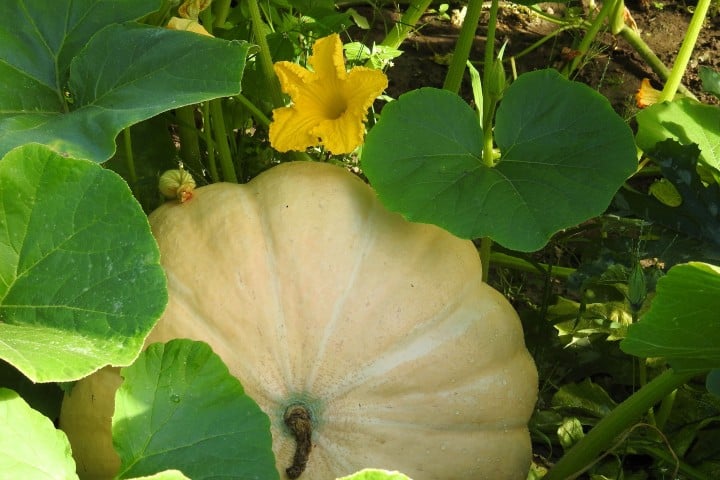 Spinach does well amidst the cucurbits. It grows strong and healthy when planted alongside them.

Cucurbits are known for producing vegetation of vines that are non-damaging. Also, the plants offer less nutritional competition to spinach plants.

You should note that cucurbits grow faster than spinach. You can mitigate the risk by planting your spinach after the cucurbits have matured.

Some members of the family to consider growing alongside include: 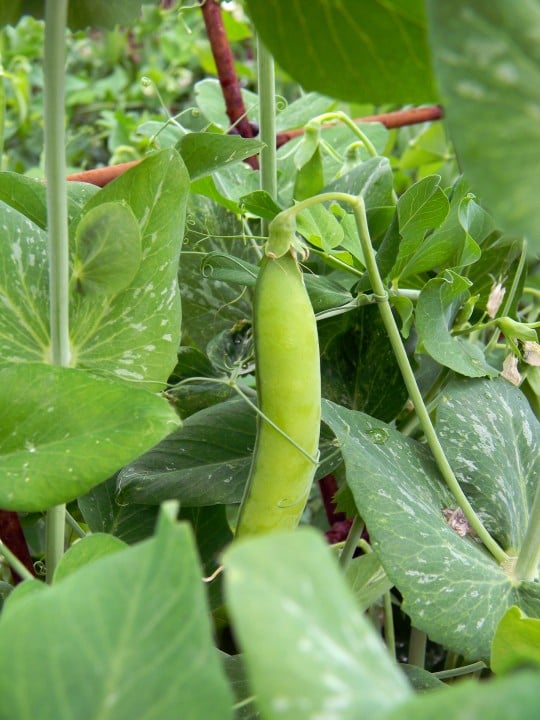 Peas are suitable for companion planting with spinach for their ability to add nitrogen to the soil. They provide shade and make efficient use of space.

Similar to peas are the bean plants. However, peas are more beneficial to spinach than beans because they leave more nutrients in the soil.

Some peas and beans to plant beside your spinach include: 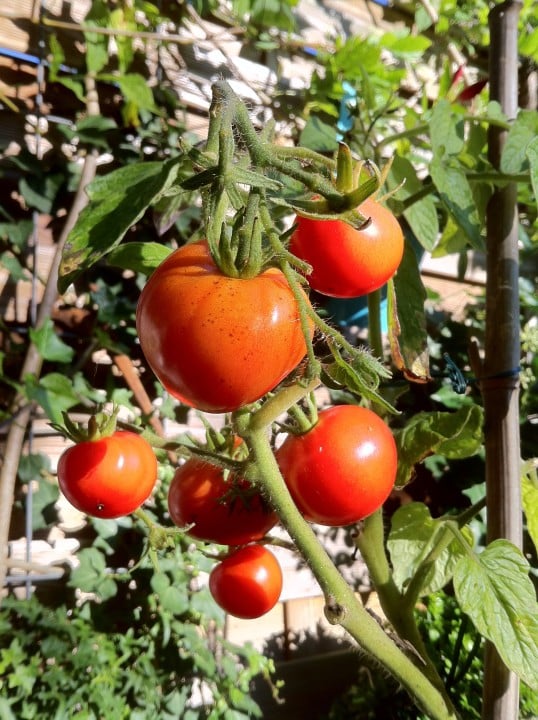 Plants in the nightshade family play a vital role in adding flavors to our dishes. Likewise, they are also beneficial to spinach as companion plants.

These plants grow well alongside without competing for nutrients.

The tomato plant is one good example of the nightshade family. Despite being a heat-loving crop, it can grow well with the cool season spinach.

Some plants of the family to consider include: 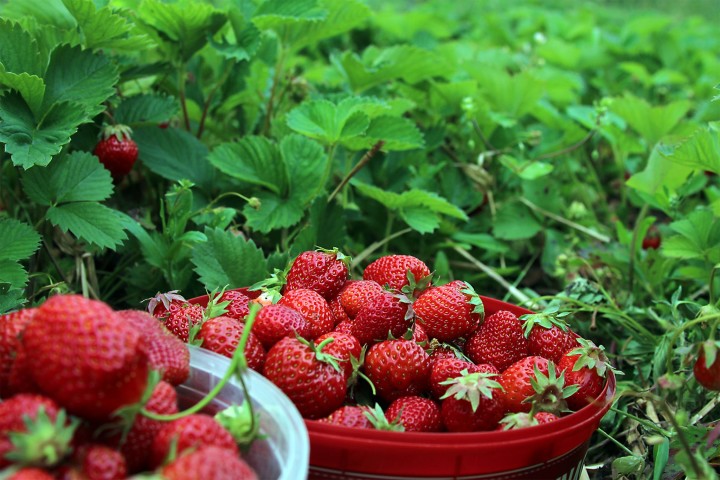 Strawberry plants are a worthy companion to spinach and will leave you satisfied.

The best part is they don’t compete for available nutrients. This is because of their ability to consume them at a different soil depth than spinach.

Strawberries keep the soil moist and cool, while saponin in spinach protects strawberries against common diseases.

This often leads to higher yields for both crops. 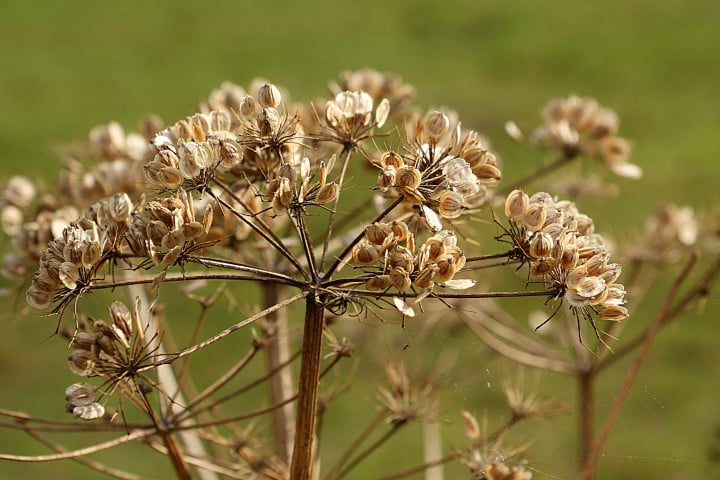 Have you heard of umbellifers? The name may sound unfamiliar, but they are the typical aromatic plants you use as vegetables in your garden.

Some of these plants are herbs.

Umbellifers have a strong scent that deters pests from invading your spinach population.

For example, dill, a member of the Umbelliferae family, promotes the growth of spinach and other neighboring plants. However, it must be planted when spinach is maturing.

This helps maintain a balance of nutrients, making the spinach larger and tastier.

Celery also works quite well as a companion. 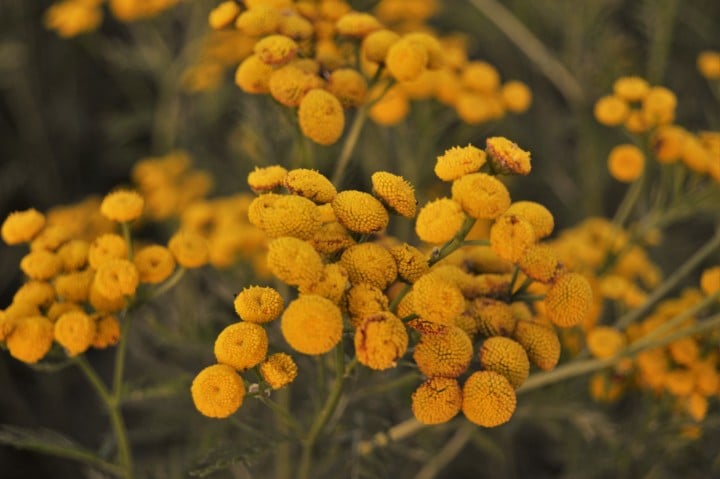 Tansy serves as an excellent companion, thanks to its yellow leaves that repel insect pests. Tansy also helps increase nutrients in the soil, such as potassium which is beneficial for spinach growth.

However, keep tansy away from animals and children because of its toxicity. Instead, only grow it as an ornamental plant alongside your spinach. 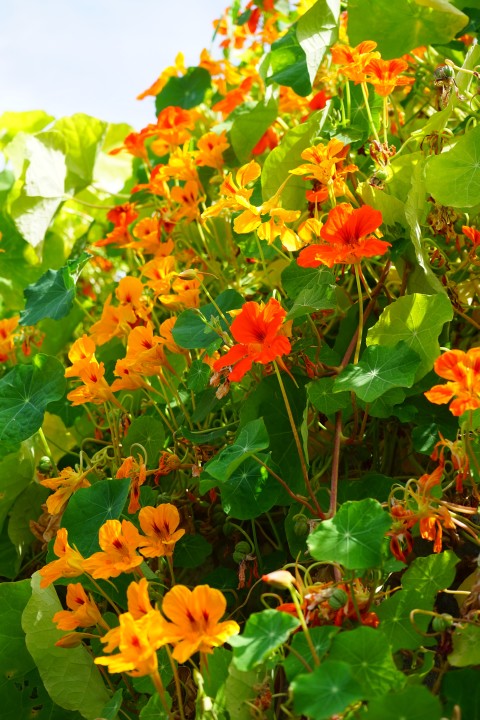 Nasturtiums are suitable for growing alongside your spinach as a pest repellent. They contain bright-colored flowers that trap insects such as aphids and beetles.

Ever thought about growing spinach together with fruits and exotic plants?  Here are a few to mention. 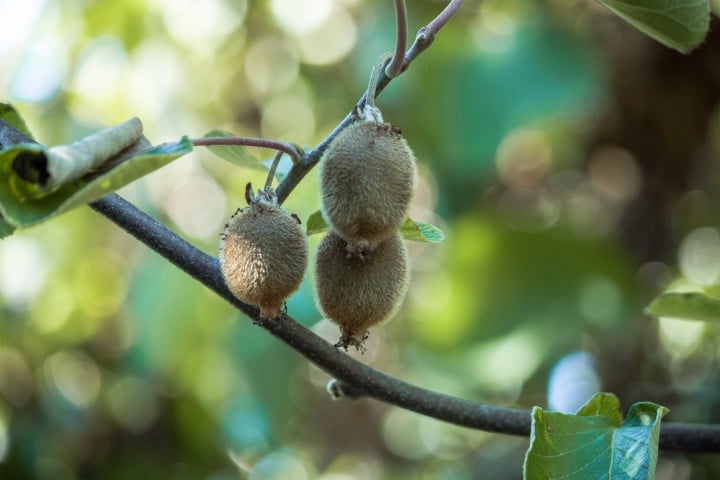 Kiwi fruit is an edible berry found in the species of woody vines. Apart from being edible, the plant provides beautiful foliage for your garden. 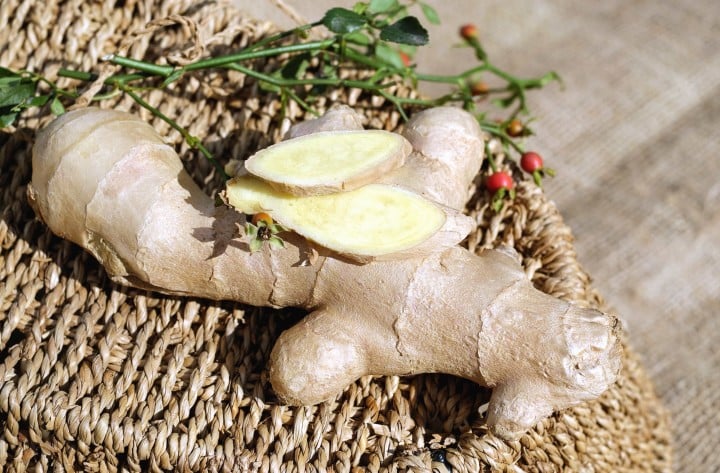 Ginger is widely used as a spice. It’s found in the Zingiberaceae family together with other plants like turmeric and cardamom.

It has narrow leaf blades and grows to about one meter tall. Ginger blends in well with spinach and forms a good team in repelling insects and bugs in the garden.

Some of the worst companion plants to spinach are Fennel, Coriander, Caraway, and Potatoes since they compete for nutrients and are harmful in some way or the other.

Also Read:
Does Potting Soil Go Bad And How To Store

Companion plants can be beneficial to the growth of your principal crop. However, not all plants can be companions since they may have conflicting nutrient and water requirements.

If you have been leaving lots of space around your spinach, you now have more than a fair idea of how to utilize it.