Curly tail lizards can be a problem around your garden or patio, especially if you live in Florida. They eat almost anything, including regular food items, which makes them thrive around human settlements.

They’re not particularly known to be aggressive or dangerous. However, for the well-being of your garden plants and pets, it might be in your best interest to control their population. 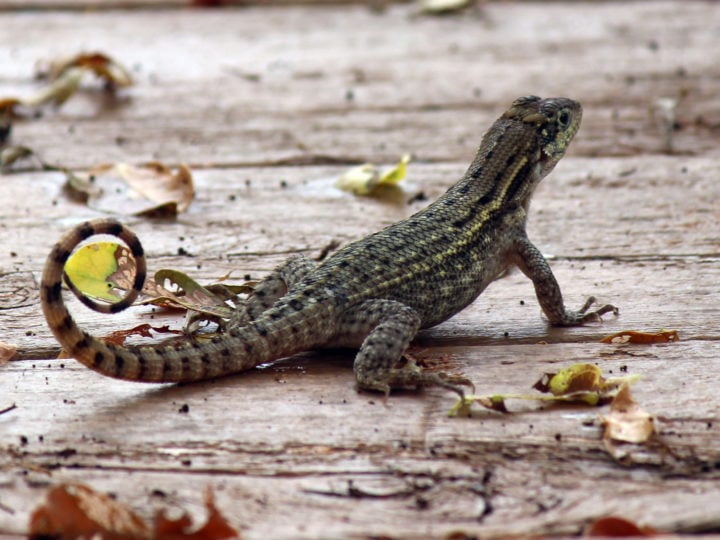 Are Curly-Tail Lizards An Invasive Species?

Also referred to as Leiocephalus or northern curly tail lizard, they are terrestrial and native to the Cayman Islands, Cuba, and the Bahamas. In some parts of Puerto Rico and Jamaica, they’ve gone extinct.

They were intentionally introduced to Florida to fight sugar cane pests in the early 1940s. However, what started as a controlled experiment soon grew out of hand and caused the population of the lizards to spread across the state. Now, the species are considered invasive.

When a particular species is labeled as invasive, it causes economic or ecological harm in the environment where it is not originally from. It also costs a lot of money to control their spread.

Now, these lizards can be found in 11 counties in Florida. Each year, they keep spreading at about a mile.

Curly tail lizards are particularly famous around Palm Beach. Sometimes called the saw-scaled curly tail, the adults can grow a total of 10 in (26 cm) in length, including the tail, which is usually curled up when they are on the ground. Others can grow from snout to vent at about 3.5 in (9 cm).

Their ability to adapt is one of the reasons why the International Union for Conservation of Nature (IUCN) considers the curly tail lizard a least concern species. They also do not pose any danger to native species like the cane toads or Burmese python.

Curly tail lizards are generally harmless to humans. However, their omnivorous nature could be a problem for animals like spiders, anole, small crabs, and other lizards.

They are very alert and move quickly, especially when they feel threatened. Their tails would curl upwards as a way to intimidate their predators from far away. When they notice the predator inching closer, they search for a safe place to hide.

Additionally, when they are scared, they love to go into a burrow, under the sand, or a cavity. When they are held or put down immediately after, they stay motionless for some time(for safety purposes). People have referred to this as the lizard’ playing dead’.

They are often not dangerous and remain relatively calm if left alone. Some species do not like being handled. However, they can become tame enough to be handled after a certain period. In captivity, they can live up to eight to ten years. 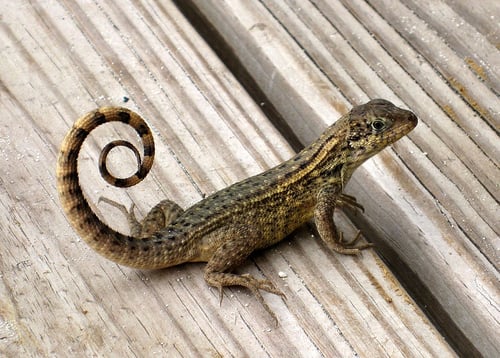 How To Identify A Curly Tailed Lizard?

As the name suggests, one very distinctive feature of this lizard species is the curly tail. Additionally, this curly tail lizard has a glossy body and is gray with a hint of brown in some species.

Also Read:
What Is The Job Of The Flower Of A Plant? What Role Does It Play?

It is a strong and sturdy built animal with overlapping scales all around. Its sides are lighter in color than the back, which is usually dark with dots or stripes.

The tail is also black, and its belly is almost a shade of white and cream. Other species may appear green, white, or yellow.

A quick way to differentiate the females from the males is by looking at their tails. The males have enlarged scales near their vent called the cloaca, and the base of their tail is usually more swollen.

These omnivores will eat insects like wax worms, grasshoppers, crickets, etc. They can also feed on flowers, green leaves, fruits, or vegetables. Other types of lizards are also part of their diet, mainly the brown Anole lizards.

Females can lay eggs in captivity as long as the temperature and humidity are appropriate and a mate is present.

In the wild, they reproduce seasonally in their natural habitat. Females fight for mates when there’s a shortage of one. Males will also try to intimidate other males to get the female mate. They do this by curling their tails.

The reptiles love a clean environment and are quite content sleeping on the beach under a pile of sand. Their main channel of communication is through their tail.

They often use it to show courtship and territorial ownership. They can attack and bite when they feel they are in danger, but their bite is not poisonous.

What Are The Possible Effects of A Curly Tail Lizard Infestation?

When not appropriately controlled, invasive species can spread all around. Most people worry about their pets eating a curly tail lizard and what it would do to them.

Some lizards are toxic, but this type is not one of them. Although, if your pet eats one, you should take several precautions to ensure it is totally safe. 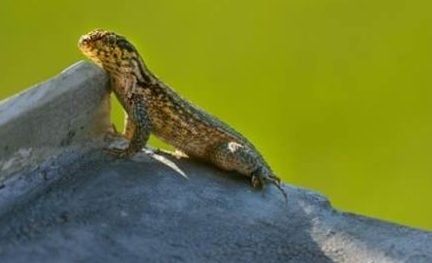 How To Get Rid Of Curly Tail Lizards?

There are multiple ways to go about this.

1. Use A Repellent Spray

An excellent way to get rid of the curly-tailed lizard is to use pest repellent sprays. However, you should get one that’s safe for both your pets. You don’t want to harm the lizard either and just scare it away.

Also Read:
Can SUPERthrive Burn Plants And How To Recover

A spray is a good option because it can easily get to where the lizard nestles. Perhaps it’s on your window sills or gutter; using a spray will effectively work in these places.

Follow the directions on the product or spray as much as you think is enough to do the job.

You will need to do this once a month. Gradually reduce the application frequency if the results are satisfactory.

In due time, the lizards will be gone for good.

If the lizard is in your house and you don’t want to use foul-smelling sprays, there’s another alternative. You can make a mixture made up of smells that curly tail lizards hate.

This includes onions, grounded coffee, garlic, etc. You can make a mixture of these ingredients by blending them and adding water. However, you are advised to place the mixture in a spray bottle.

You can also place these ingredients directly where the lizard usually stays, although it is likely to be less potent.

To make sure this method is effective, do this several times a week until the reptile disappears.

Another fast and easy way to get rid of this lizard is to use Mentha Piperita, also known as the peppermint plant. This strongly scented plant repels this lizard and some other types too.

When they smell it, it causes confusion making it impossible for them to live in the environment.

You can plant this around places you know the lizard stays, or you can blend the leaves into a mixture and spray. Another option is to buy the spray online.

Peppermint is not the only thing they hate— pepper works too. Just grab a can of pepper spray or make one at home.

Do this a couple of times a week to see the best results.

4. Use A Lizard Trap

This method is suitable for indoor infestations. Buy a lizard trap and place them in areas where you have seen the lizard stay.

Also Read:
Plants That Look Like Corn Dogs And Cornstalks

With enough time and patience, the lizard will step right into the trap, and you will get rid of it forever.

Mothballs are also quite effective in repelling lizards or reptiles at large. However, keep them out of the reach of your children or pets, as they could be poisonous if consumed.

Using crushed eggshells is a cost-effective and natural method of getting rid of the little pests. Place them around the areas frequented by them.

It is advisable to use fresh eggshells since it makes the lizards believe that a far larger predator is around. 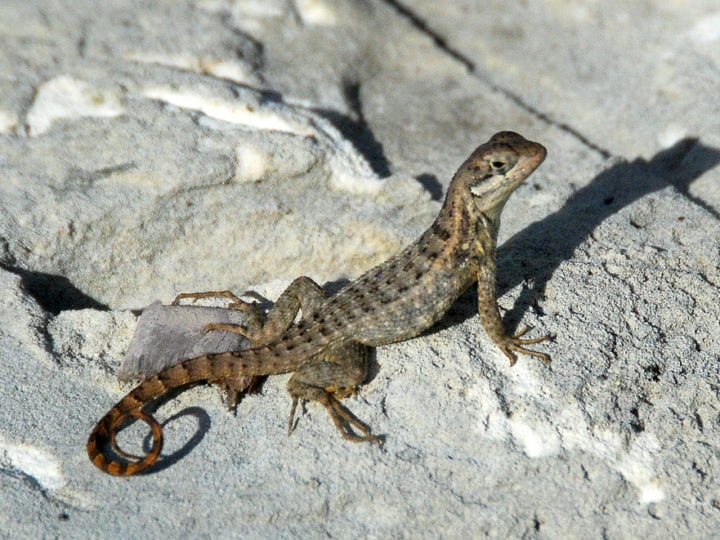 Where do curly-tailed lizards live in the wild?

This lizard loves to bask in the sunlight and is a very adaptable creature. In its natural habitat, it is found in sunny and sandy areas with lots of trees, seawalls or curbs, and rocks. Even though they are good climbers, they usually stay on the ground.

Also Read:
10 Plants That Are Used For Clothing
Where do curly-tailed lizards hide around my house?

When they have to live among humans, they like to stay in areas that imitate their natural habitats like gardens, parks, and sidewalks. Indoors, they may hide inside crevices, cracks, or openings around doors and windows.

What do curly-tail lizards do most of the time?

They are cold-blooded reptiles; therefore, they spend most of their active daytime basking under the sun. They only go back to the shade when they reach the desired temperature level.

Curly-tailed lizards are invasive pests that could turn problematic if not controlled.

With our straightforward methods, you can quickly get rid of them and get on with your day-to-day activities. Spraying repellents around the areas where they stay is the best course of action.