Ginseng (American Ginseng) is a perennial plant native to North America. It’s found in the Ivy family and is commonly used in traditional medicine as a herb.

Apart from its native home, Ginseng is also cultivated in China and has previously been exported to Asia, where it’s used as a coolant and for sedative medicinal purposes. American Ginseng resembles a small parsnip during the early stages of growth that forks during maturity. 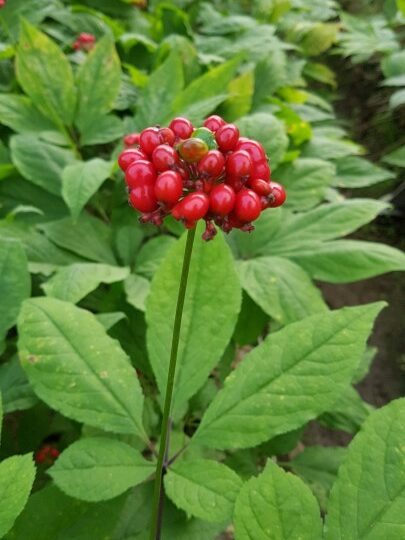 The plant measures around 15 to 46 cm tall during maturity and bears three leaves that carry 3-5 leaflets.

There are many companion plants to Ginseng that typically like to grow in similar conditions.

This article discusses these plants in detail to keep you informed.

Also Read:
Does Potting Soil Go Bad And How To Store

The plants mentioned below are perfect companions if you are looking to grow something alongside Ginseng. Alternatively, if you want to harvest it from the wild, be on the lookout, as these plants could indicate the location.

However, there are state-specific laws regarding this. Make sure you aren’t violating any. 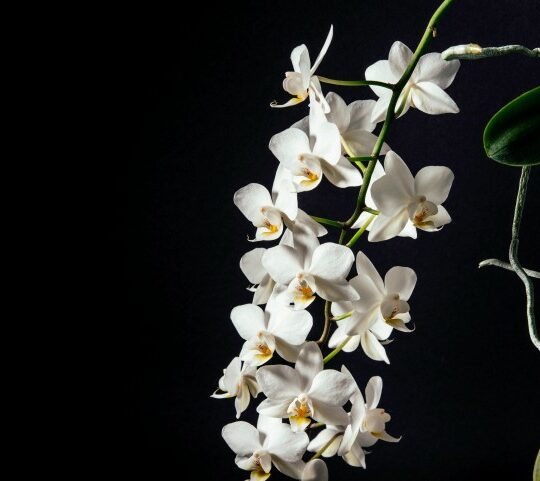 Adam and Eve orchid, also known as a Putty root, is a herbaceous perennial plant you will often spot growing near Ginseng. However, this may not always be the case.

The plant grows from rounded corms and produces around 15 flowers on a bare stem. The flowers appear dark brown and are about ½ inch long. Their leaves are elliptical with several white veins on a green background.

It blooms in mid-May towards early June. During winter, you will spot the Adam and Eve orchid leaves scattered all over atop dead leaf litter, with new ones showing up in early spring. 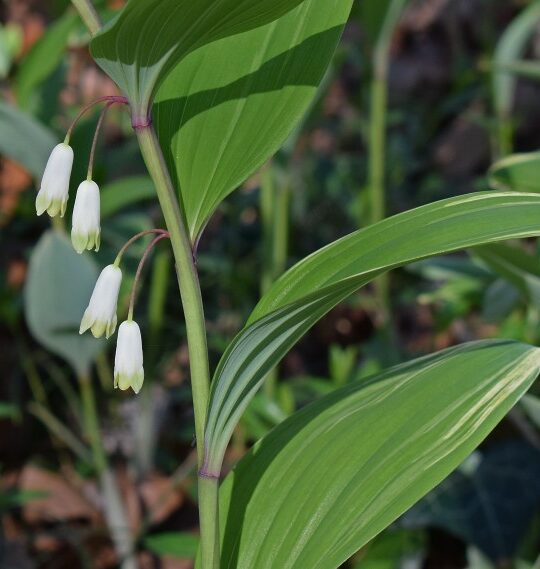 Solomon’s Seal is a perennial plant with arching stalks that grow in a zigzag manner to a 5 feet height. Their striking yellow, green tubular-shaped flowers hang along the stem in pairs.

3. Jack in the Pulpit  (Arisaema triphyllum) 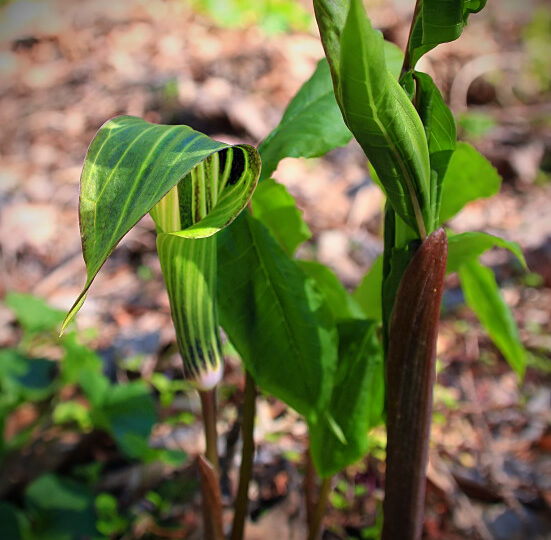 Jack in the Pulpit is also referred to as Indian Turnip. It’s a perennial that loves shady places and prefers floodplains and moist deciduous woods. This makes it an excellent companion to Ginseng.

Also Read:
What To Plant With Junipers: Best Companion Plants

The plant’s flowers start blooming in March, depending on the locality. The flowers dot a green color with a maroon striped spathe surrounding a maroon-colored spadix bearing tiny embedded flowers.

Jack in the Pulpit also has glowy red berries that ripen up with the consistency of tomato fruit in late summers. These berries attract birds and rodents. 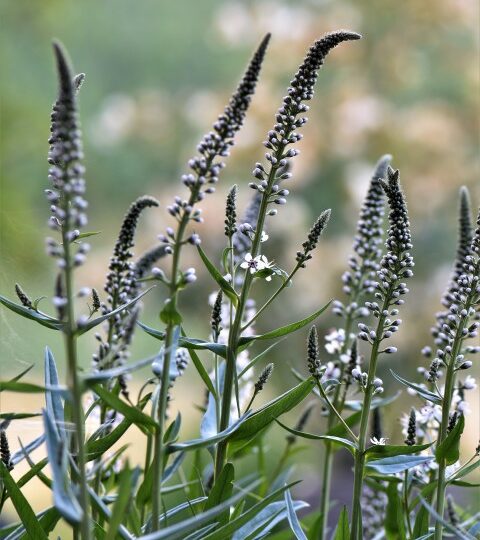 Black Cohosh has other common names, such as Black snakeroot or bugbane. It’s called “bugbane” because of its unpleasant odor that repels insects.

They are herbaceous wildflowers native to the eastern United States and prefer growing in lightly shaded areas. The plants prefer moist soil rich in organic matter.

Their flowers are white and star-shaped, occurring in small plumes that rise to 6-8 feet. The leaves are deep green and fern-like.

Black Cohosh is an excellent companion to Ginseng and wild ginger. 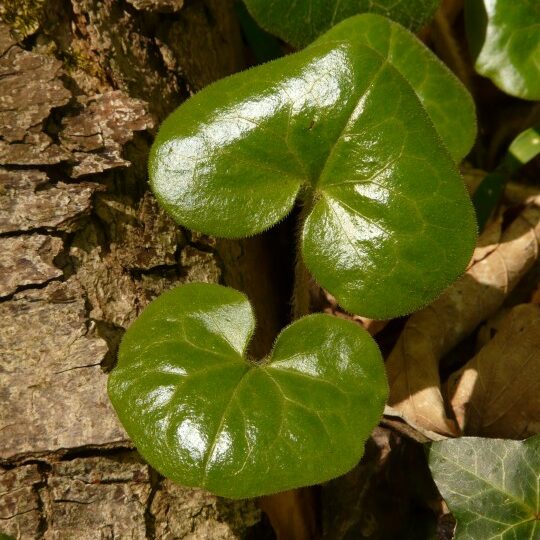 Wild Ginger (A. Canandese) is native to Eastern and Central North America, with the exact origin as Ginseng. Their dark-green leaves are large, heart-shaped, and deciduous.

The plant is typically a creeping rhizome with a ginger-like flavor (though not culinary ginger) and carries pendulous flowers that hang beneath its foliage.

The flowers are pollinated mainly through ants and insects that thrive on them. Their petal tips are unusually pointy and spiraled. 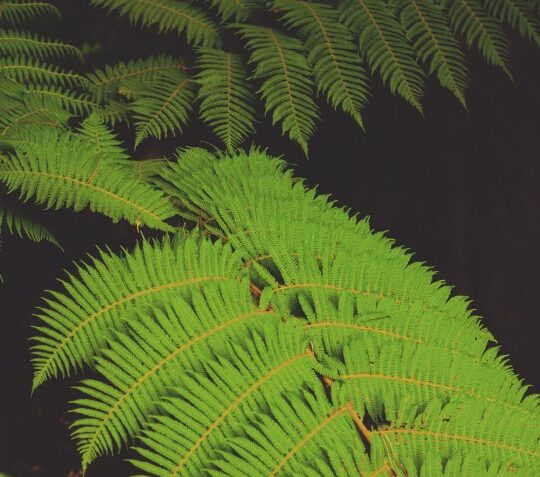 They are the most common grape ferns that grow in the same habitat as Ginseng. However, you will also find them growing in areas Ginseng doesn’t grow.

The fern is native to North America, with a large population found in Minnesota. They characterize a single sterile frond with a triangular outline and often consist of five to twelve leaflet pairs.

Their leaves are bright green, narrowly lance-shaped, and taper to a pointed tip. The leaves wither by fall as opposed to most leaves of the grape ferns that persist through winter. 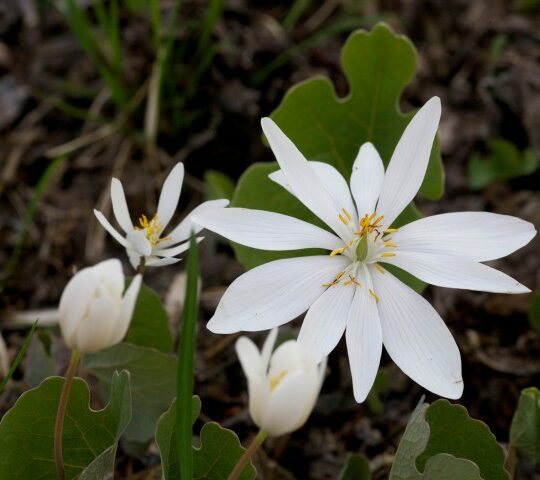 Bloodroot is among the rare woodland flowers that bloom in spring. It was named “bloodroot” because the roots bleed bright red sap when you cut them into halves.

They are rhizomatous, growing up to 10 feet tall. The plant forms extensive colonies by spreading across the forest and contains a single leaf and flower growing on separate stems.

Their flower buds begin to bloom in early spring into white petaled flowers with central stamens that are bright yellow. These flowers are stunning, opening up in the sun and closing at night. Their leaves grow to a width of 9″ after flower blooming, with the plant going dormant in late summer.

They are an excellent companion to Ginseng as well. 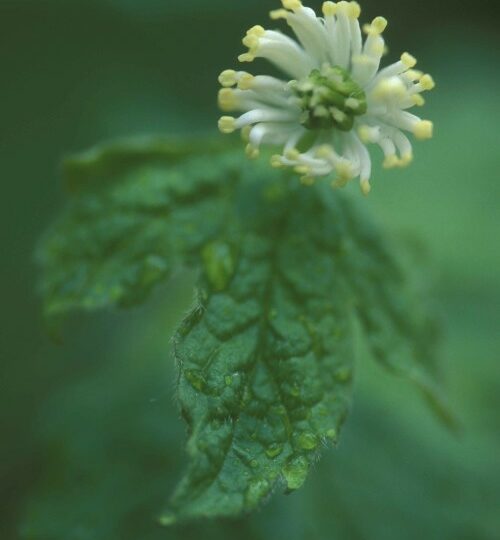 Goldenseal is a yellow underground rhizome with a golden sap and a woodland perennial commonly harvested with Ginseng because of its value as a medicinal herb.

They grow into flowering stems during winter with hairy lobed leaves. Their white flowers lack actual petals, with the white stamens showing up like the petals. 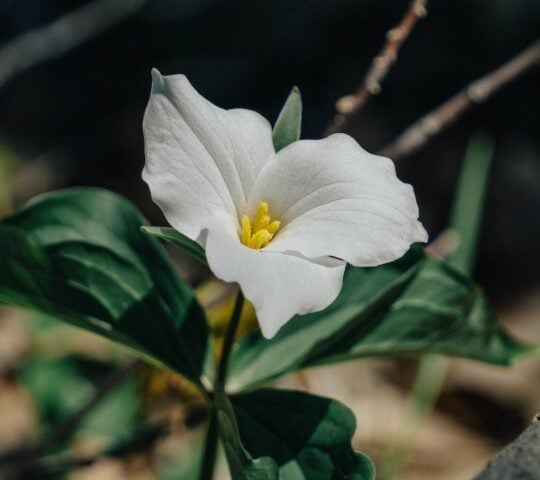 Their leaves are broad and contain three-leaved flowers that appear in various colors, including white, deep purple, and bright red.

There are 43 species of Trillium in the world. These plants hybridize easily, making it difficult for scientists to differentiate species.

Trilliums lack true leaves and stems and produce an extension of the rhizome above ground. 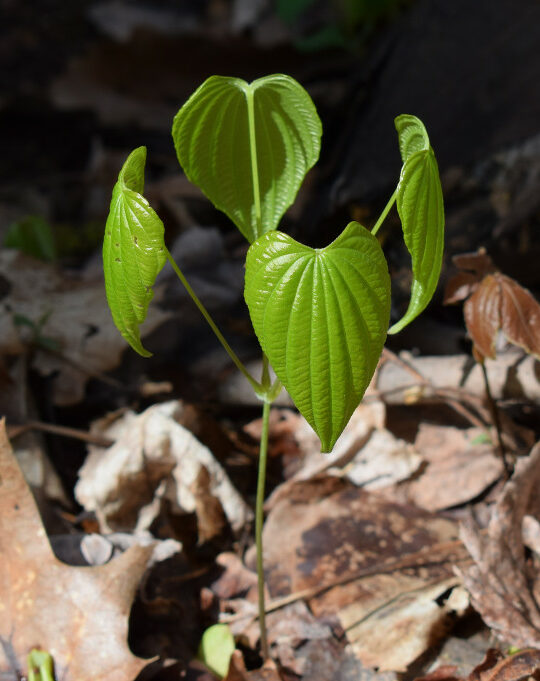 Wild yam contains rhizomes that spread underground. Their leaves alternate with those at the vine base, typically whorled and opposite.

The plant produces vines that grow in height carrying away the male and female flowers away from the plant base. In the long run, heart-shaped pods replace flowers. 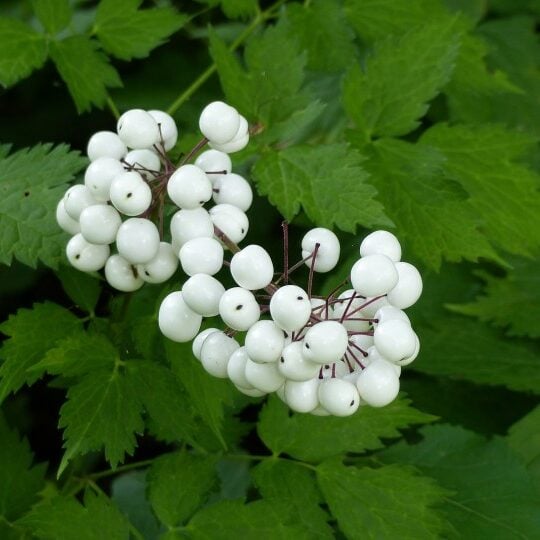 Doll’s Eyes is a flowering plant species in the genus Actaea. It’s a Black Cohosh look-alike thanks to the similar foliage.

The plant is native to Eastern parts of North America, the Eastern United States, and Canada. Doll’s eyes prefer hardwood and mixed forest environments with clay or coarse loam soils.

The plant grows to more than 50cm and produces bipinnate compound leaves. They produce their white flowers in spring that mature into striking white berries.

These berries ripen into fruits during summer and hang on until frost. 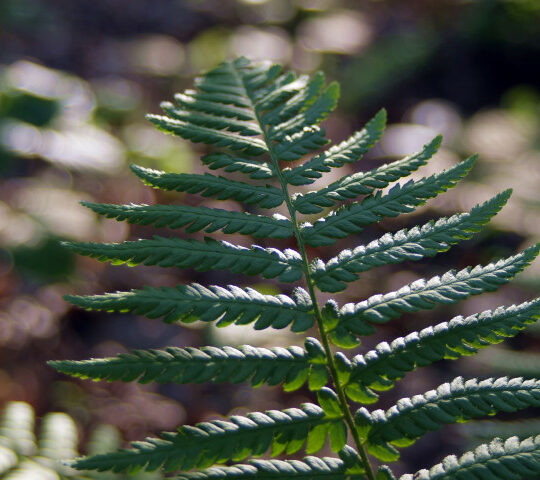 They have a tufted, clumping habit with the clump persisting year after year. Their fronds remain green throughout the winters. The underside of the fronds is covered with sparse hair. 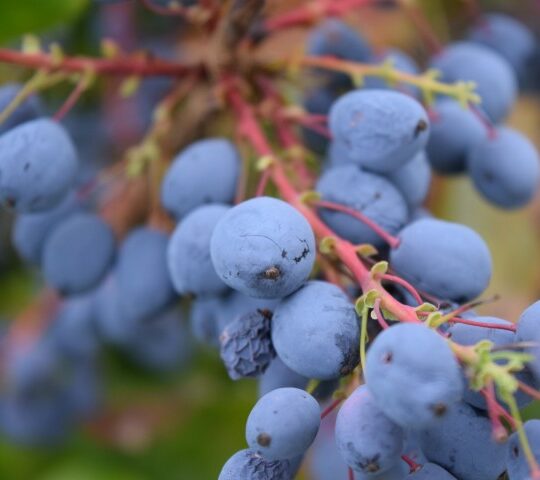 Blue Cohosh also adds to the list of ginseng companion plants. It’s a flowering plant in the Barberry family and a native of Eastern North America.

They grow in moist coves and hillsides, generally shady places with rich soil. Their leaves are bluish-green and contain yellowish-brown flowers that mature into blueberry-like fruits.

It’s a multi-stemmed perennial growing up to 3 feet tall. Their tri-compound leaves turn purplish in spring. 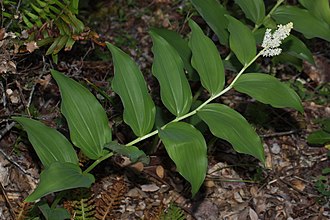 False Solomon’s Seal is a woodland plant in the Liliaceae family. It has a superficial resemblance to Solomon’s Seal, which explains its naming.

For the record, you will find the two plants growing together. You can distinguish between the two by knowing where they produce flowers on the shoots.

The persistent plant rhizomes make the plant re-emerge in spring after its apparent demise in fall. Their growing conditions are similar to that of Solomon’s Seal and, by extension, the Ginseng. 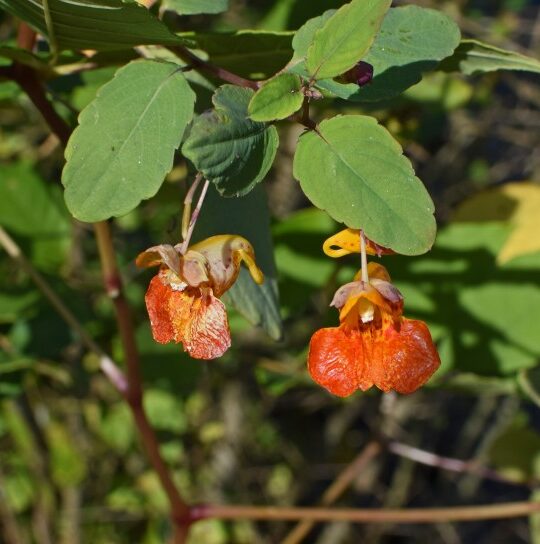 Jewelweed is an annual herbaceous plant native to Eastern North America. It loves to grow in bottomland soil and along creeks. You will also find them on forested edges of marshes and bogs.

The plant grows to 5 feet, blooming in late spring towards early summer. Their flowers are orange, making them attractive to both humans and animals. Leaves are oval-shaped with tooth margins.

They begin flowering in mid-summer and survive until the frost period. Their fruits grow into elongated capsules that are sensitive and burst at the slightest touch when ripe. 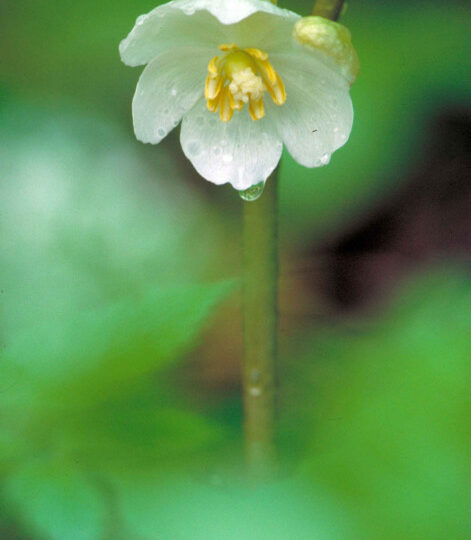 Mayapple is a herbaceous perennial in the barberry family. It’s a woodland plant that grows into a colony from a single root.

Their nativity is Eastern North America, and you will find them growing in shady fields, open deciduous forests, roadside, and river banks.

The plant contains a compound, podophyllotoxin, useful as an ingredient in medicines. It grows from shallow and creepy underground rhizomes into mature upright stems.

Their leaves take a furled shape as the stem grows and elongates in spring. They begin unfolding when the stem reaches its full height.

Their stems carry one to two leaves, and only stems with more than one leaf bear flower.

Flowers develop mainly in April or May and appear as nodding white to rose in color.

There you have a list of Ginseng companion plants. Most of them belong to the same native habitat and have similar growing preferences.

You want to have these plants around for mutual benefit should you decide to plant Ginseng in your garden.

Also Read:
Will Cayenne Pepper Hurt Plants And How To Apply?