There has been considerable debate surrounding the Mustard plant. Most gardeners have no idea if Mustard is a plant, a bush, or a tree. This article looks at Mustard in detail to clarify its exact nature and what it grows to become.

To overcome this mystery, we need to go down the pages of history briefly. The Mustard seed is a subject of many cultures and religions—the earliest recorded times date to 3000 BCE when Indians and Sumerians used it as a spice.

The Greeks and Romans have also mentioned the plant numerous times in biblical writings. Ancient physicians, like Hippocrates, used the Mustard seed for medicinal purposes.

Today, the Mustard seed is the largest spice by volume in world trade. Most gardeners and consumers use it in several snacks as a spice or condiment. So, what exactly is Mustard? Keep reading. 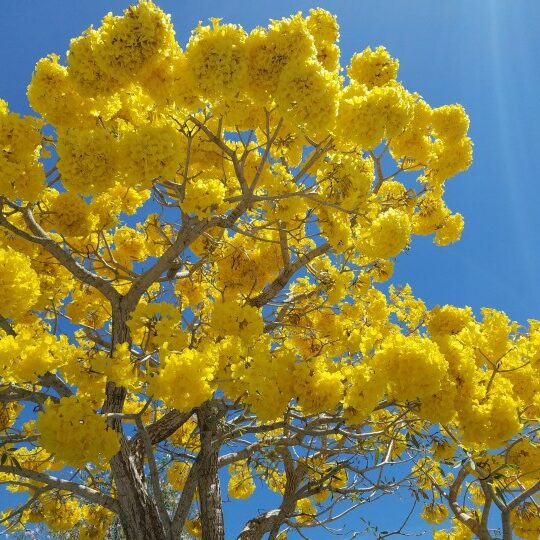 The Mustard is native to Europe and Persia (known as Iran today). Other places you will find it include the East Indies (present-day Malaysia, Indonesia, and the Philippines), Southeast Asia, Northern Africa, the United States, and Canada.

Mustard thrives best in temperate climates with well-draining sandy soils but could also do well in other soil types.

The plant loves full sun, and you don’t want to plant it in humid climates where it could pick up mold and suffer stunted growth.

You should also avoid planting it near septic systems or cisterns, thanks to its deep penetrating taproot system that could cause damage.

The Mustard grows to a low of 3 feet and a maximum of 12 feet. The leaves are broad and dark green with a succulent feel.

It bears large clusters of golden yellow flowers that mature into seedpods carrying tiny seeds measuring up to 1 to 2 mm in diameter.

Is The Mustard A Plant, Bush, Or A Tree? 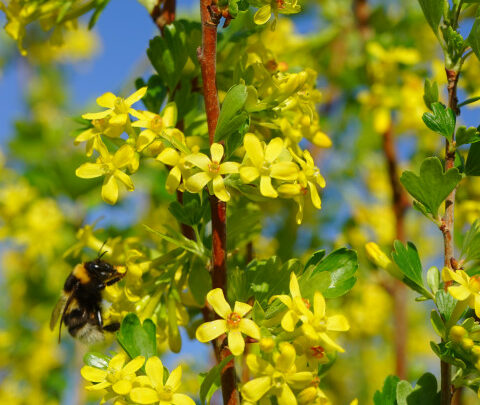 Generally, plants are classified in the kingdom Plantae and could be anything between trees, shrubs, herbs, bushes, grass, ferns, or mosses.

For the record, Mustard is technically a plant and a bush. But the one typically grown in most gardens can be referred to as the Mustard plant. 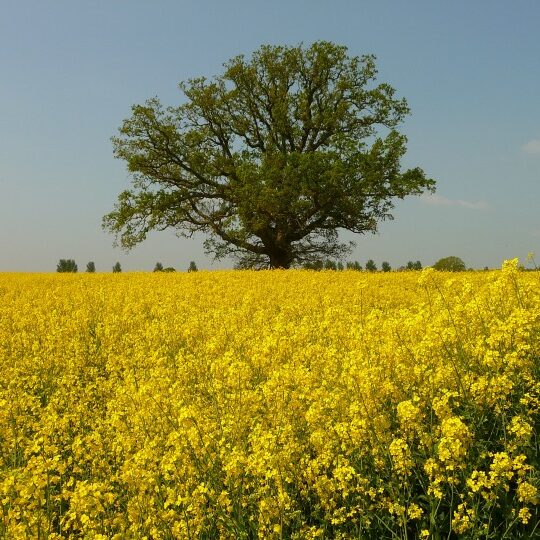 Black seeds can produce a tall shrub that can grow up to 12ft tall. It tends to branch profusely and grow as wide.

It is due to this tall and wide-growing nature that Black Mustard is referred to as a tree. Although technically not a tree, the naming has stuck with it over the years.

On the flip side, white-colored seeds produce a leafy plant commonly grown in home gardens. It is usually referred to as the Mustard plant. It is also sometimes incorrectly called a bush due to its shape and size.

Notably, the Mustard bush is an altogether different plant that you will find growing in Africa and is also referred to as the African Mustard Bush. It’s different from the Mustard plant (or tree) you could grow in your garden.

It’s mainly grown as feed to livestock and has some medicinal value. The African Mustard Bush grows to 13 feet tall and doesn’t fit well with home gardens.

What Does Mustard Seed Turn Into? 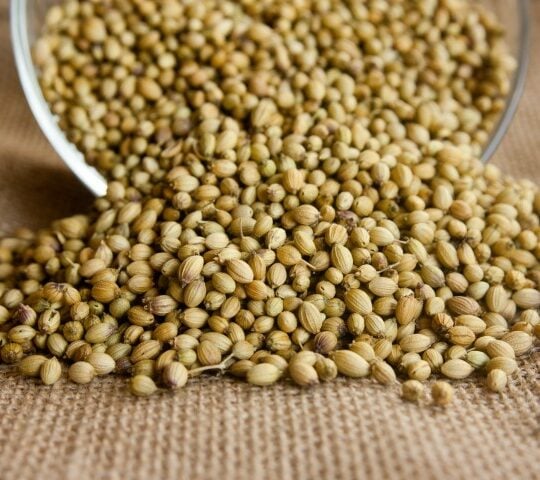 We have looked at the Mustard seed in ancient texts and the fact that it has been used as a spice for a long time. Your next concern could be what Mustard seed grows into or from where you get these seeds.

As alluded to in biblical writings, Mustard seeds are the tiniest of seeds but grow disproportionally to their size. They could turn into a small plant or a reasonably large shrub (giving the appearance of a tree).

These plants and shrubs then produce numerous seeds of their own.

What Are The Different Types Of Mustard Seeds? 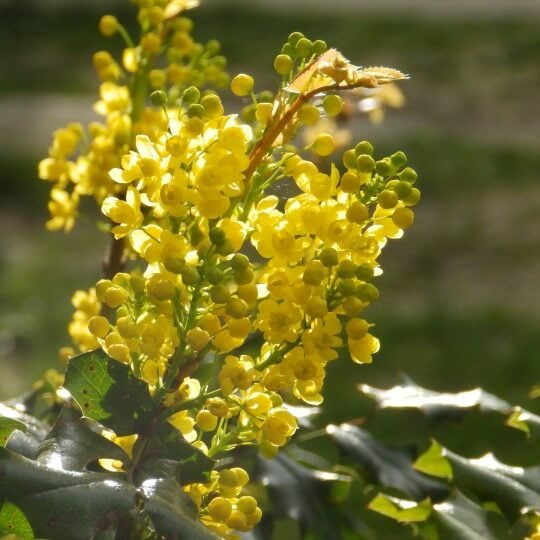 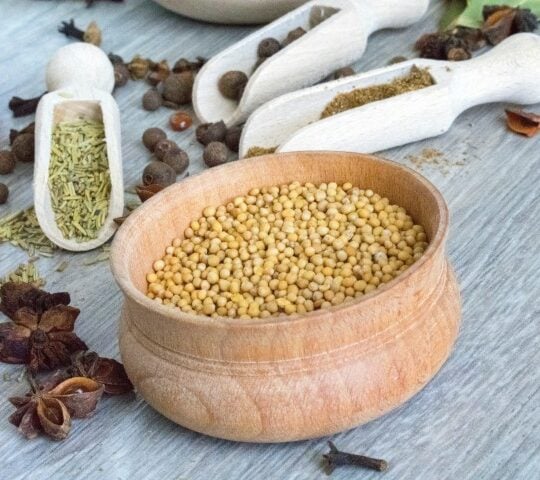 White Mustard is typically grown in North Africa, Mediterranean Europe, and the Middle East. Gardeners use its round seeds for pickling and flavoring. White Mustard is also used as a cover crop in Europe. 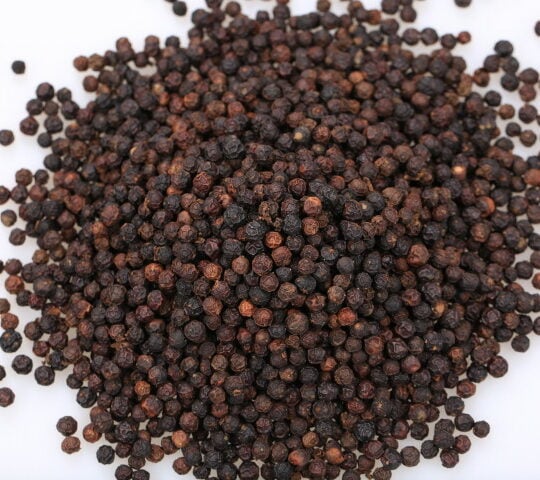 Seeds of the Black Mustard Seed are hard and round. They are spicier compared to seeds of White Mustard.

Black Mustard seed is commonly grown in Chile, Argentina, the US, and some European countries.

The Brown Mustard seeds are similar to those of the Black Mustard. It is native to the foothills of the Himalayas but grown in the United Kingdom, the US, India, Canada, Bangladesh, and Denmark.

The seeds have a mild flavor and are commonly used in fried foods.

Is The Mustard Plant Edible? 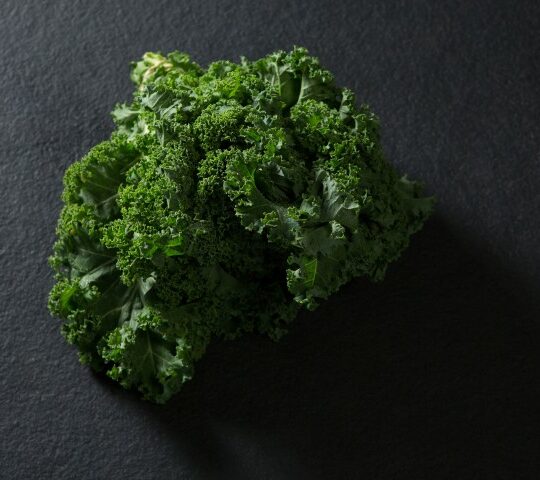 Yes, you could eat any part of the Mustard plant as food. Leaves, flowers, and stems can be eaten raw or cooked.

Mustard seed is used fresh as a spice and condiment when dried.

Proper cultivation practices require starting the mustard plant from soaked seed. Grow them in nursery pots for three years before transplanting them to the garden.

Before transplanting, ensure the bed is broken loose and free of weeds to establish roots. Maintain the Mustard plants at a spacing of 12 – 15 feet apart except in areas with high saline soils or winds where planting them together might be of the essence.

You want to maintain a weekly watering regime during summer to promote root growth. Avoid watering the plant in the fall of the first year to encourage taproot establishment that will help support the plant in subsequent drought periods.

Mustard is everything you thought it to be; a plant, a bush, and a tree.

The Mustard plant grows to a height of 3-12 feet (depending on the type) and is associated with many cultures and ancient physicians. It is incorrectly referred to as a tree due to its shape and size.

The Mustard Bush is neither of the above. It grows mainly in Africa and is named the African Mustard Bush. It’s primarily used to feed livestock and doesn’t suit gardens.

We hope this article helps solve the mystery surrounding Mustard.

Also Read:
Coconut Tree vs. Palm Tree – How To Identify The Difference