Do you have quail around your backyard or garden? They are so adorable. Aren’t they?

However, their population is drastically declining. Guess why? Because of us, humans.

Yet again, we are culprits of yet another animal species disappearing. So what can we do about it?

The best we can do is provide them with a safe habitat and food.

So how can we do exactly that? By growing plants that attract them.

These plants provide food and, more importantly, cover and shelter that protect these vulnerable birds.

First, let’s learn more about quail, their ideal habitat, and their feeding habits. 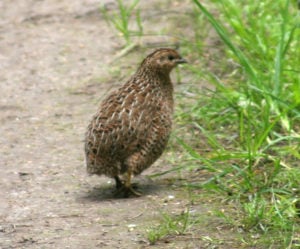 Quail are mid-sized birds placed in the order Galliformes. They are broadly classified as New World quail (Odontophoridae) and Old World quail (Phasianidae).

Quail native to North America belong to the New World classification. They are 34 species under this classification, with California Quail and Northern Bobwhite being popular.

New World quail are small winged and can be recognized by their rhythmic three-note calls. They prefer to walk and run around mostly.

However, they can take short, intense flights and usually take off when threatened.

Their plumage varies from dull to brilliant. Some species have ornamental crests or plumes on their head.

The males are slightly larger than females.

You can find quail in many habitats, including tropical rainforests, deserts, grasslands, woodlands, mountain ranges, and agricultural lands.

Quail are not that fussy with their diet ranging from seeds, tubers, fruits, and leafy vegetables to worms, insects, and small rodents.

Plants That Provide Cover To Quail

The birds have several predators such as coyotes, owls, hawks, snakes, ground squirrels, and cats. In urban areas and suburbs, cats are the main threat.

The plants mentioned below provide essential cover for roosting, nesting, and protecting hatchlings. They are known for their colorful foliage year-round, with flowers ranging from white, pink, to red. The otherwise green leaves turn to reddish-purple during fall. The trees also produce red berries in winter. 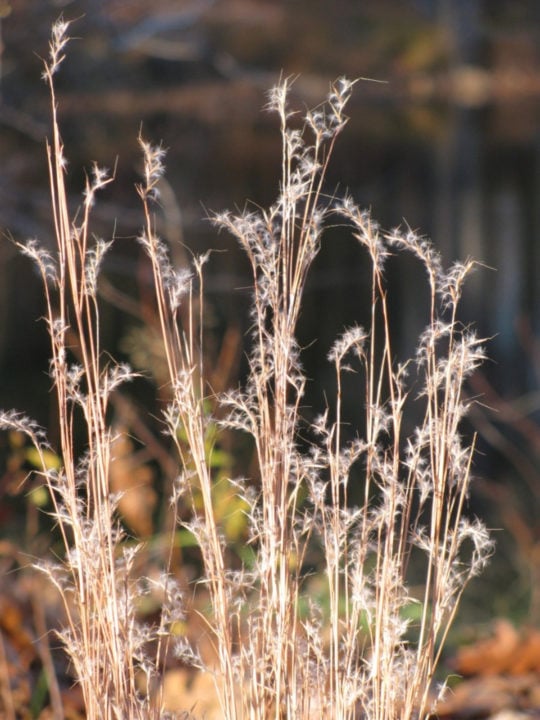 Little bluestem is a perennial warm-season grass native to North America. It is characterized by its blue-green foliage and fluffy white seed heads. The leaves tend to be flat and hairy at the base.

Also Read:  15 Plants That Are Resistant To Dog Urine

The grass grows up to 3 feet tall and 1 foot wide. It is resilient and can grow in any soil type, even in poor, rocky soils. However, the foliage turns rusty during fall.

Many birds such as songbirds and quail prefer eating the seeds of little bluestem grass. 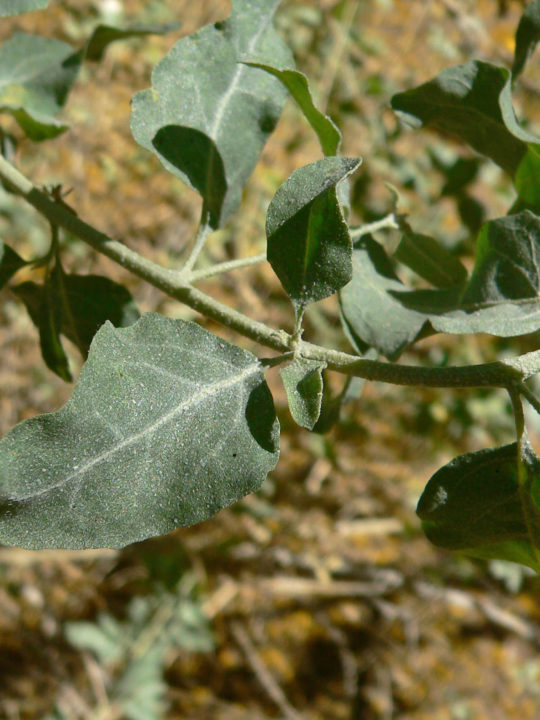 Quail Bush is a native evergreen shrub found primarily across the coastal regions of southern California.

The plant bears scaly leaves that appear gray-green and grow up to 5 centimeters long. The leaves are toothed along the edges.

Quail bush can grow up to 10 feet tall and 10 feet wide. Although the plant is not ornamental, it is resilient and can thrive in harsh conditions such as high alkalinity, salinity, heat, cold, and drought.

It is an excellent wildlife plant, attracting numerous birds, small mammals, and insects. No surprise, it is a quail favorite and named after it. 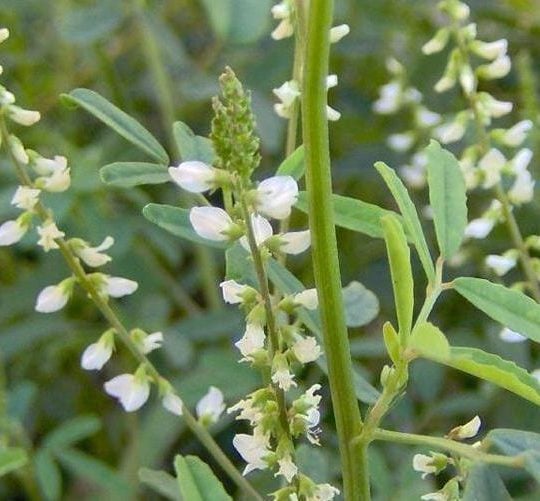 The plant is characterized by alternate leaves that are up to 2 inches long. The stems terminate into clusters of white flower stalks that appear after every 2 years.

Being leguminous, the plant enriches the surrounding soil with nitrogen. It also serves as fodder for feeding livestock. 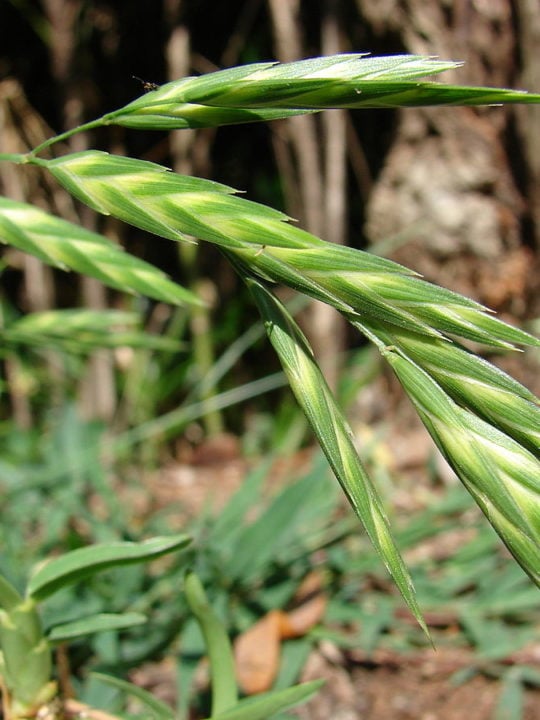 Rescuegrass is a cool-season grass that grows 1 to 2 feet tall. The grass can be distinguished by its flat greenish-yellow seed heads that give a nodding appearance.

It is highly adaptive and can grow in various soils such as poor soils, rocky soils, or sandy soils. Rescuegrass grows well under the full sun but can tolerate light shade.

The grass provides cover to birds such as bobwhites and quail when other vegetation is scarce during the spring season. Also, its seeds and leaves are an important food source for these birds. 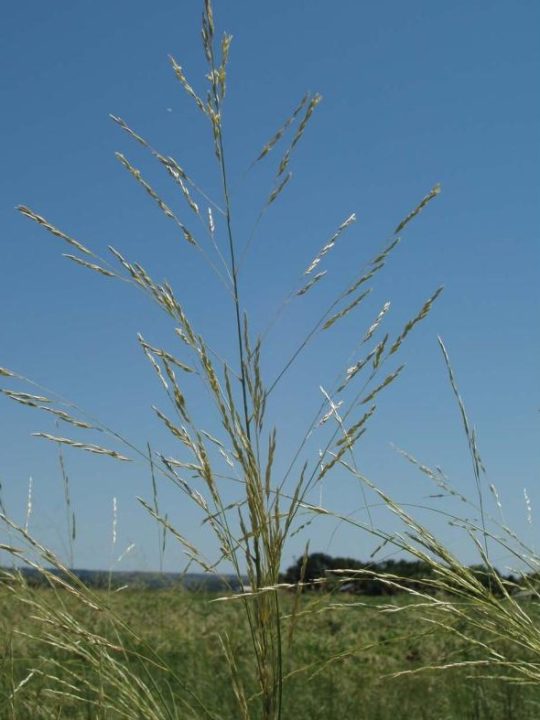 Giant Sandreed is native to North America and grows to about 8 feet in height. It is characterized by its long leaves that taper towards the end and huge flowering heads that appear triangular. The stems are also relatively thick as compared to other grass.

Also Read:  How To Get Rid Of Curly Tail Lizards

The grass prefers loose, sandy soil and is slow to mature. It tends to form large clumps and spreads rapidly via underground rhizomes.

Apart from providing necessary cover, the grass is useful as its flowers and seeds are consumed by quail and other native birds. The grass also attracts insects such as bugs and grasshoppers, an important part of the quail diet.

The plants in this section provide cover and prove as excellent food sources for quail. 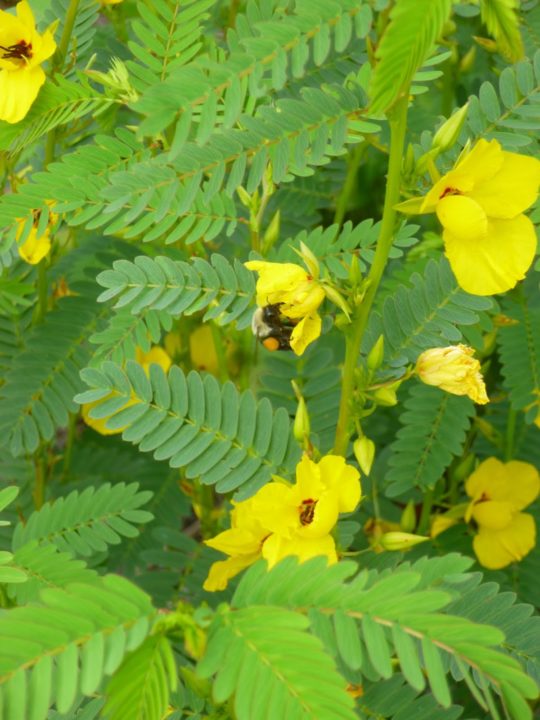 Partridge Pea is a North American native and a member of the legume family. The plant is known for its bright yellow blooms, a nectar source for bees, and attracts birds and butterflies.

The plant is drought tolerant and can grow up to 25 inches in height. It can survive in various soils ranging from poor dry soils to sandy, loamy or gravel-based soils.

Partridge Pea is a critical source of nutrition for quail and a host of other native birds. 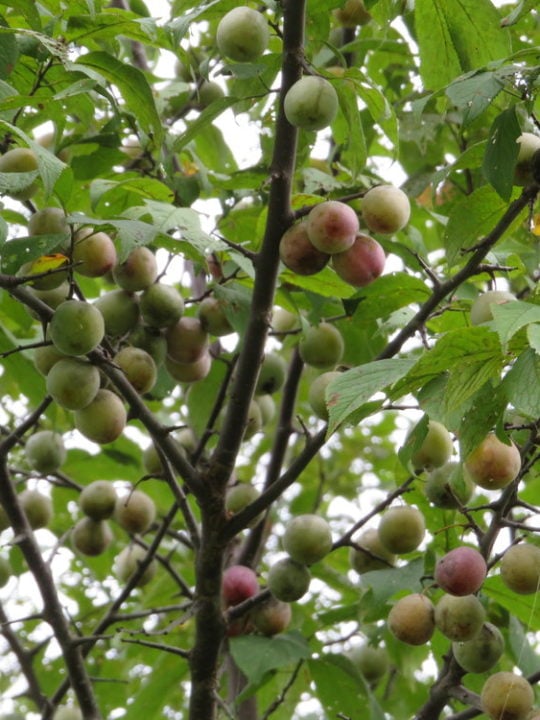 The tree is known for its sweet edible fruits and grows 15-20 feet tall.

Its leaves are serrated and oblong and grow up to 4 inches long and 2 inches wide. The flowers are 5-petalled and appear white.

The trees provide food and shelter to birds, including quail. 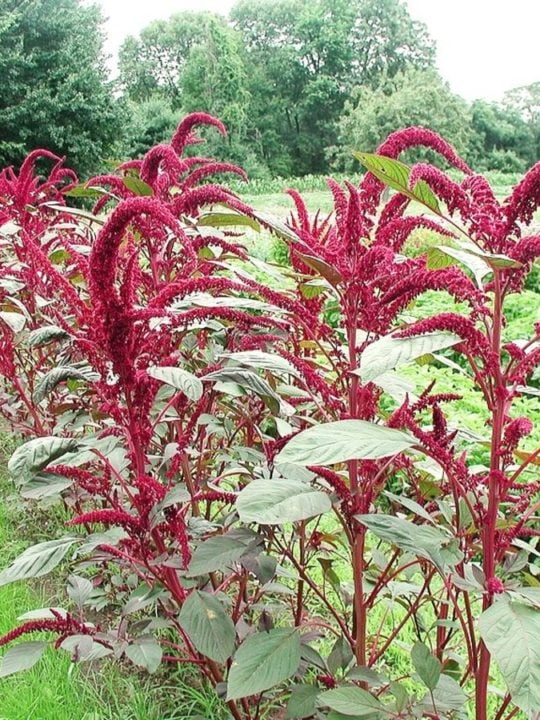 Amaranth is a genus of perennial plants mostly used as ornamentals in Europe and North America.

However, the plants also serve as excellent food grains in many other parts of the world. They grow up to 8 feet in height, with leaves, stems, and flowers appearing maroon to crimson.

The plants do well on average to poor soils and require equal amounts of nitrogen and phosphorus. Additionally, the soil must be well-draining.

Amaranth is a quail favorite, thanks to its nutritious food grains and edible leaves. 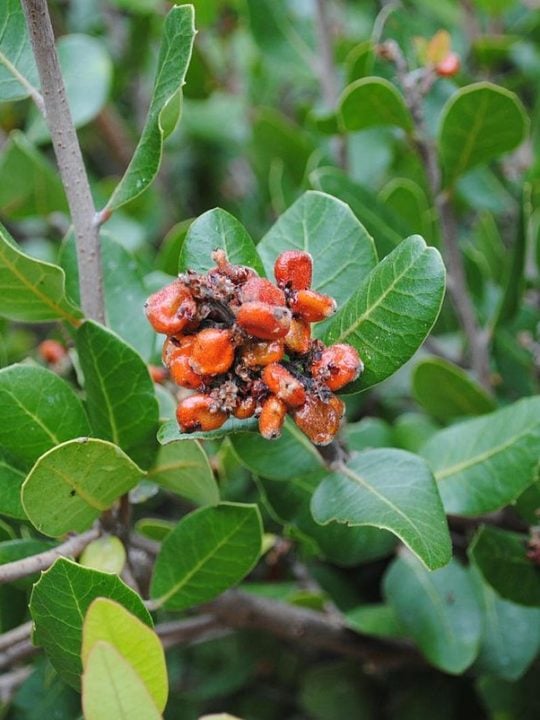 Lemonade berry is an evergreen shrub that is native to the coastal regions of California. It is fairly large, growing up to 25 feet tall and forming thickets.

The plant has dark green leaves arranged simply, growing up to 3 inches long. They have a waxy coating that reduces transpiration and allows them to stay green during long dry summers.

Also Read:  Will Frost Hurt Onion Plants? How To Protect?

The flowers appear tiny and are pale pink. However, the main attraction is the reddish fruit which has a flat appearance and a tart flavor, giving the plant its name.

The fruit is an important source of nutrition for quail and other birds. 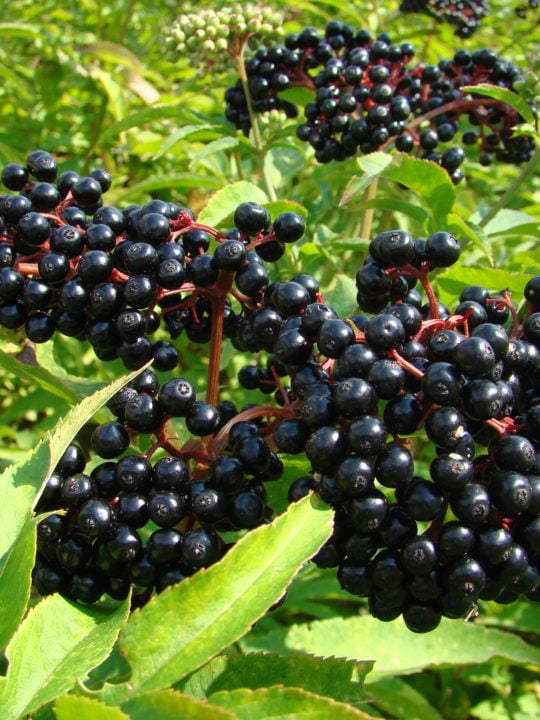 Elderberry is a large shrub/bush that bears black-blue fruits in clusters. These berries are a bird favorite and are also used to make jams, pies, squashes, juices, and wines. The plant is native to the US and Europe.

Some general characteristics of elderberries include compound leaves with serrated margins and big clusters of white flowers that turn into ripe berries.

Elderberries can grow in a variety of habitats, including poor soils. However, it cannot withstand drought and must be watered regularly.

For best yields, well-draining loamy soil is recommended, along with full sun exposure. The plants do not require pruning for the first two years.

Toyon is a Californian perennial native shrub that can be instantly recognized by its showy appearance. The plant is also known by other common names such as Christmas berry and California Holly.

Toyon plants bear green leathery leaves that are serrated at their edges. The flowers are tiny and white, appearing in large clusters.

However, the main highlight is the bright red berries that give the plant its specimen appearance. These berries are an important food source for many birds, such as quail, western bluebirds, robins, and mockingbirds.

Toyon is highly drought-resistant and versatile, adapting to any soil type. The plant can tolerate shade as well. 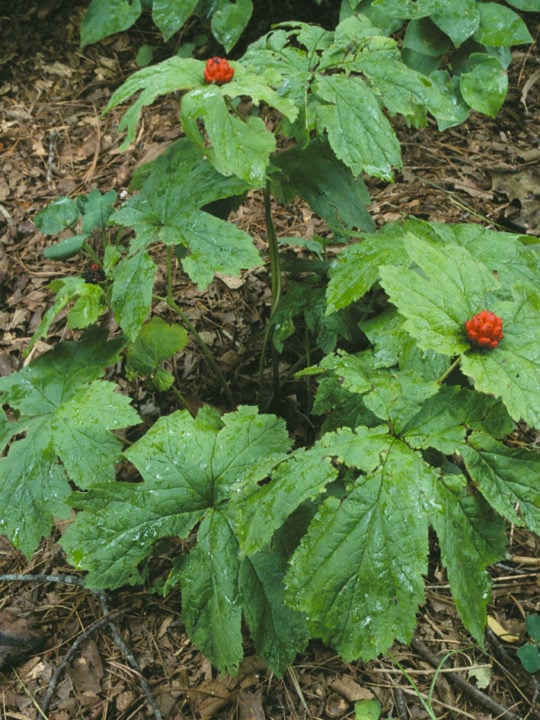 Goldenseal is a North American native herb known for its medicinal properties from time immemorial. The plant can be recognized by a singular whitish-green flower which gives way to a cluster of red berries.

Also known by other names such as Orangeroot, or Yellow Puccoon, the plant is listed as endangered owing to overharvesting.

Goldenseal is best grown from rhizomes from an already established plant. Since you cannot harvest it from the wild, you must procure it from a garden center or greenhouse.

You could also grow it from seeds or cuttings, which would mean a long and undependable growth cycle.

The plant thrives best in fertile and well-draining soil and tolerates shade well. In addition, goldenseals are drought tolerant once established.

Goldenseal attracts insects such as aphids, battles, grasshoppers, and bees, bringing them to quail-level for consumption. The seeds produced by the plant are also readily consumed by quail.