The cedar is an evergreen tree belonging to the genus coniferous in the plant family Pinaceae. Not only is it a great addition to your landscape but a tree of thousand other uses.

Its highly durable, insect-repellent wood is used in the construction and furniture industry.

Additionally, some varieties, such as the eastern red cedar, have medicinal properties. The tree also shows greater resistance to most pests and diseases thanks to its aroma. 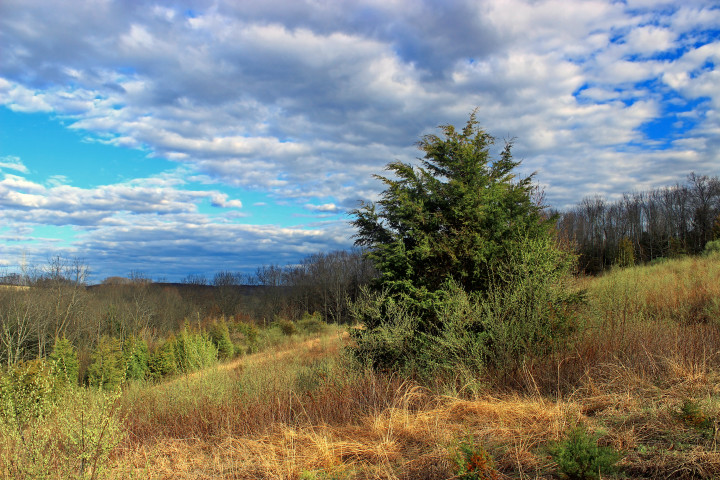 If you have cedar trees around, you must be wondering what plants to grow underneath them to cover up the barren ground and make your landscape aesthetically pleasing.

Why Regular Plants And Grass Find It Difficult To Survive Under A Cedar Tree?

There are a couple of reasons for this. First is the fact that cedar trees prefer dark and acidic soils. Barring a few species, no other plants and grass-like this type of soil.

The second reason is the lack of water and sunlight under the thick canopy of the tree. Roots of large trees such as the cedar outcompete other small plants for water.

Couple that with dense shade and almost no sunlight, most plants find it difficult to survive.

Luckily some select plants can thrive in this harsh environment. Let us study some of them.

Plants That Can Grow Under A Cedar Tree

These plants share the same characteristics, preference for acidic soils, and shade tolerance. 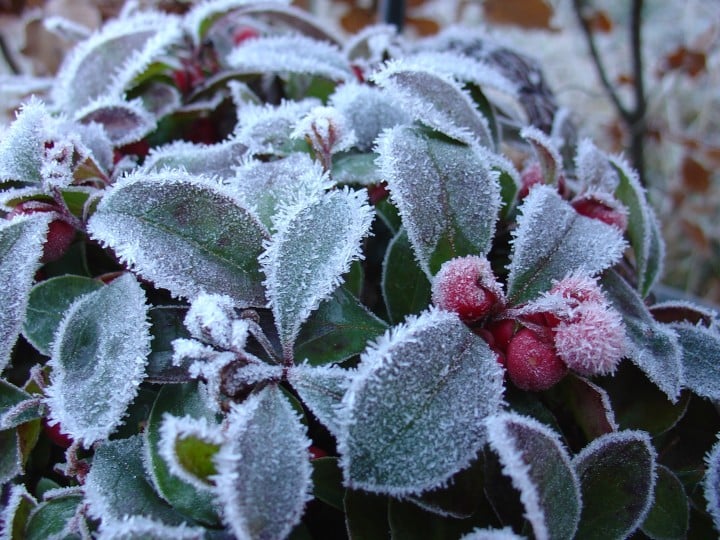 Also known by other names such as eastern teaberry, the checkerberry, the boxberry, or the American wintergreen, it is an evergreen groundcover native to North America.

Also Read:
Plants That Can Grow Without Roots

The plant is shade tolerant and prefers dry, acidic soil. It usually does not survive in hot and humid conditions and boggy soils.

Interestingly the red berries of the plant are edible and used in candies, teas, and cosmetics.

The plants are relatively easy to grow and disease-free but require frequent watering during the early stages of growth. 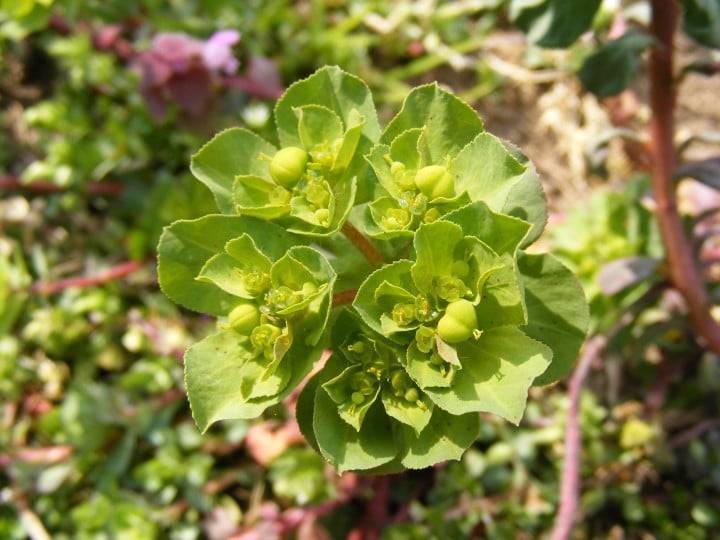 Japanese Spurge is an evergreen herbaceous perennial and is mainly used as a groundcover.

The plant is hardy and resilient and can survive harsh conditions such as cold winters and drought with relative ease.

It prefers acidic soils and is shade tolerant, making it a perfect candidate to grow under a cedar tree.

The plant grows up to 12 inches wide and 6 inches tall, characterized by leathery green leaves and white flowers that usually appear during spring.

Japanese Spurge is quite popular as a deer-resistant plant in yards across Connecticut in the United States.

The plant is low-maintenance and requires minimal watering once established. 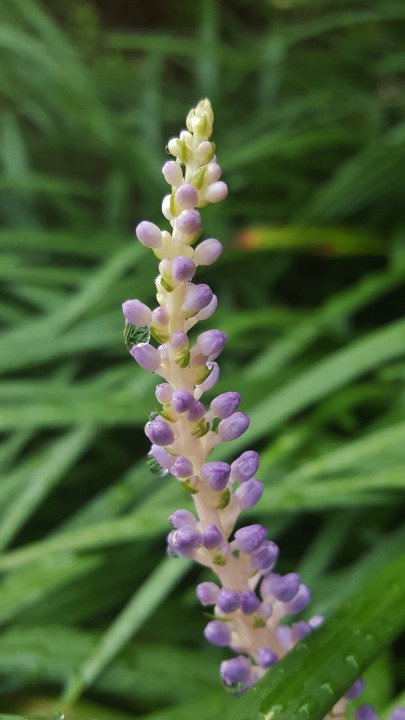 Also known by other names such as monkey grass, border grass, and lilyturf, Big Blue Lilyturf is a perennial herbaceous flowering plant.

The plant produces purple or white flowers during late summers, which mature into pea-sized berries. It is drought tolerant and can survive in a wide range of heavy to light soils.

As expected, the plant is shade-loving and can thrive well under a cedar tree.

Be aware that lilyturf is deemed to be invasive in some parts of the United States. Contact your local agriculture extension office for more information. 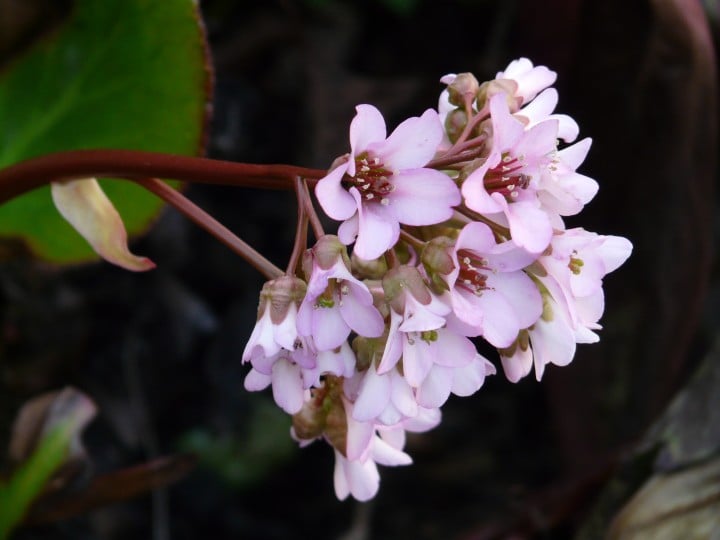 Bergenia is an evergreen perennial that spreads via rhizomes. The plant grows up to 16 inches tall, forming clumps with large leathery leaves that are up to 5 inches wide.

The leaves appear glossy green in color, eventually turning to bronze-red during fall. The flowers are cone-shaped and often range from pink to ruby red and purple.

Also Read:
Coconut Tree vs. Palm Tree – How To Identify The Difference

Bergenia plants are hardy and can survive temperature extremes of -40°F to 110°F. They also do well in various soils but usually prefer moist, fertile well-draining soils rich in organic matter.

The plants are shade-tolerant and add beauty to the empty space under a cedar tree. 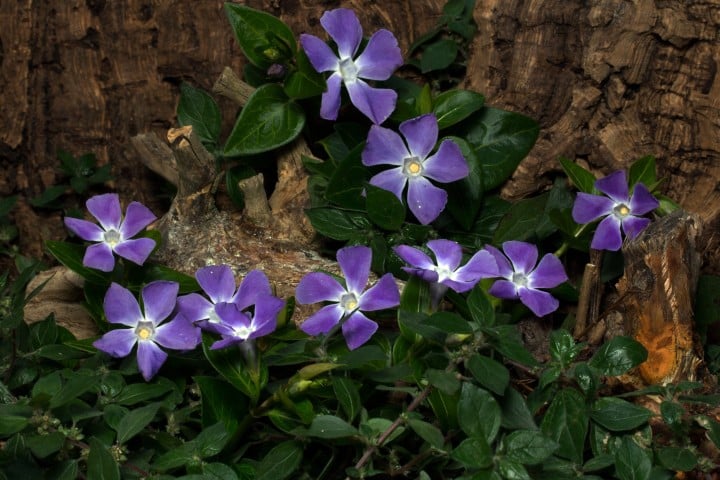 Known by other common names such as small periwinkle or myrtle, common periwinkle is an evergreen subshrub. The plant is native to central Europe and is characterized by broad, glossy leaves.

It grows to an average height of 4 inches and spreads up to 7-8 feet wide, producing purple-violet flowers during early spring.

The plant is often grown around hillsides and banks to control soil erosion. This is due to its dense growing habit that binds the soil well. 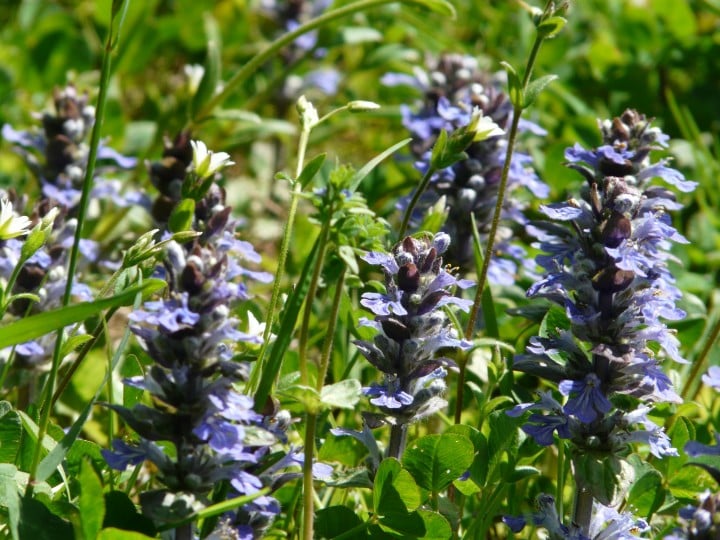 Ajuga is a mat-forming evergreen perennial and is a member of the mint family. It is often known by other common names such as bugleweed, ground pine, or carpet bugle.

Also Read:
What To Do About Cucumber Leaves Turning Yellow?

The plant is distinguished by its purple-blue to white inflorescences and dark green leaves that help add beauty to any landscape. It is pretty tough and can survive in partial to full shade.

Ajuga plants are drought-tolerant and do well in a wide range of soils, often growing in areas where no plants grow. However, they carry a terrible reputation of spreading quickly via underground runners and are challenging to control.

Prune the runners rigorously twice a year and ensure they do not spread to undesired areas. 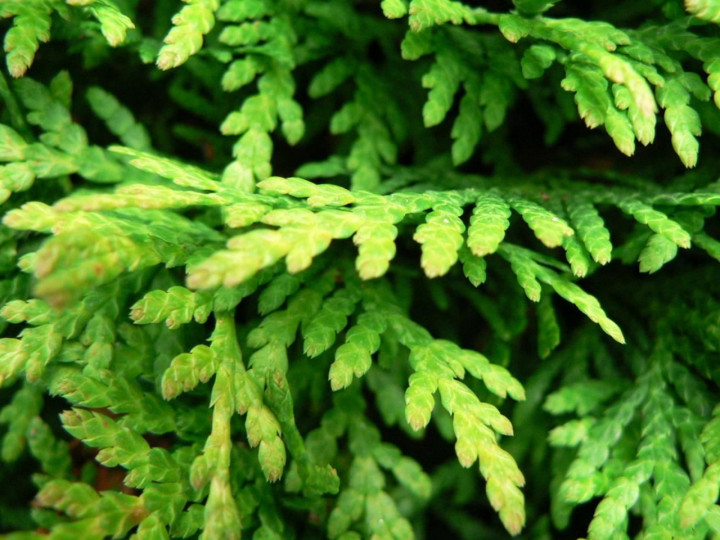 Also known by the name creeping cedar, creeping juniper is an aromatic shrub native to the northern reaches of North America. It is an excellent low-growing ground cover that can survive on a lot of neglect.

The plant attains an average height of 6 to 8 inches, spreading up to 8 feet wide. Its branches extend horizontally with leaves arranged in whorls of three. The foliage appears blue-green in spring and somewhat brownish-gray in winters.

The shrub is highly adaptive and will grow in almost any soil type and a wide range of light conditions. It can also withstand long periods of drought and requires no pruning. 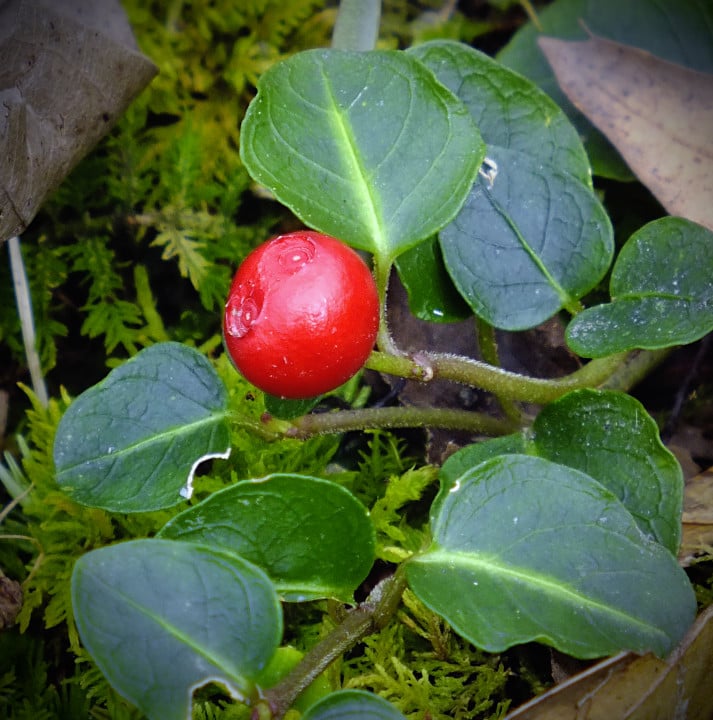 It is a native North American plant belonging to a class of creeper vines that are non-climbing. The plant grows up to 6 cm tall, forming loose mats with the help of adventitious roots. Each creeping stem is up to 30 cm long.

Interestingly, the flowers emerge into groups of two and fuse together to form bright red berries.

However, the berries are tasteless and are only consumed by some birds and mammals. 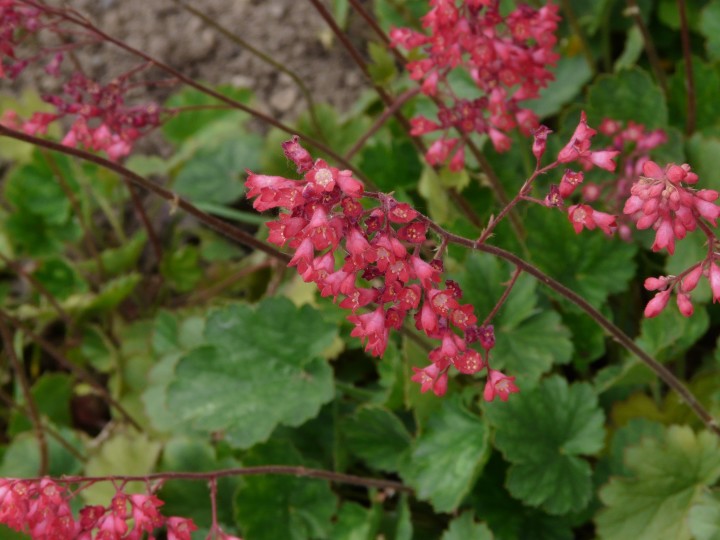 Prairie Alumroot is an evergreen perennial native to North America. Also known by the name coral bells, the plant is characterized by heart-shaped low-lying flat leaves that are up to 5 inches long and wide.

Both the lower and upper surfaces of the leaves are hairy. They are connected by 5-10 inch long petioles (stalks) to one-inch long stems. The leaves usually turn orange to red-brown in winters.

Prairie Alumroot plants can thrive in dry conditions and poor soils but require some daylight.

You can plant them at a slight distance from the cedar’s trunk to ensure they get adequate sunlight. 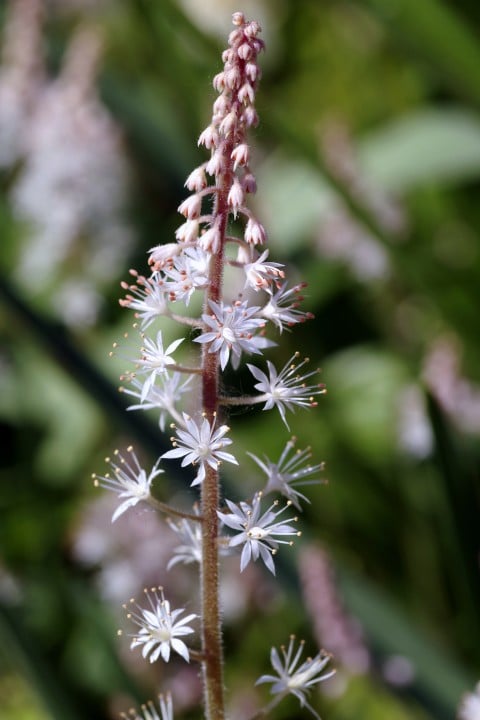 The Foamflower plant gets its name from the clusters of white to pink flowers that appear foam-like and grow on long thin stalks. It is native to North America and spreads rapidly via underground runners.

Apart from its spectacular flowers, what adds to the beauty of the plant are its semi-glossy leaves that show shades of bronze and red during winter.

Foamflower is an excellent groundcover for shady areas such as those under a cedar tree. The plant prefers some daylight and well-draining soils that are slightly acidic to neutral. 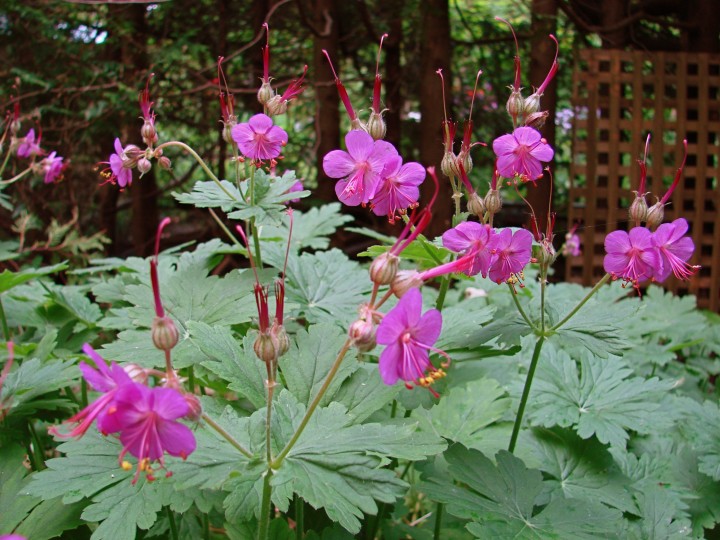 Bigroot geranium is a mat-forming perennial grown mainly as a groundcover. The naming of the plant can be linked to its extensive rope-like rhizomatous root system.

The dark green leaves of the plant are deeply lobed and fragrant. Its 5-petalled purple-pink flowers usually appear in late spring.

The plant is hardy and can survive in a range of temperatures. It prefers partial shade and well-draining sandy or loamy soils.