As a gardener, knowledge of different plant varieties can help add vibrant colors and fragrances to your garden.

We discovered a bunch of colorful red-stemmed plants that you can cultivate indoors or outdoors to bring pomp and excitement into your living space.

What Plants Have Red Stems?

Some of these plants are robust, while others require special care. Also, note that some may not be suited to an environment with children and pets. 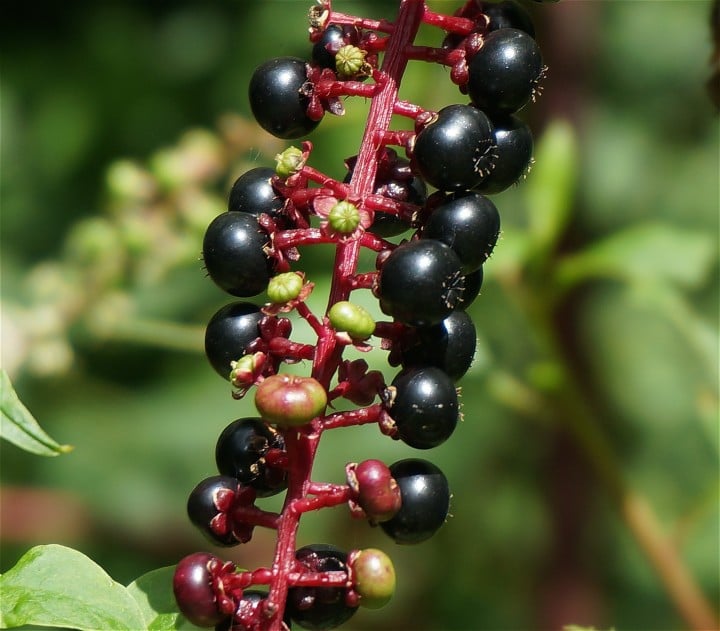 Pokeweed is a perennial herbaceous plant native to North America. The plant has also been naturalized in Asia and parts of Europe.

Pokeweed has simple green leaves with red to purplish stems and grows 1 to 3 meters high. It’s poisonous to humans and livestock, requiring you to keep safety in mind.

However, the shoots and leaves are edible in spring and early summer when cooked right. We advise you not to consume it if you aren’t sure how to prepare it. 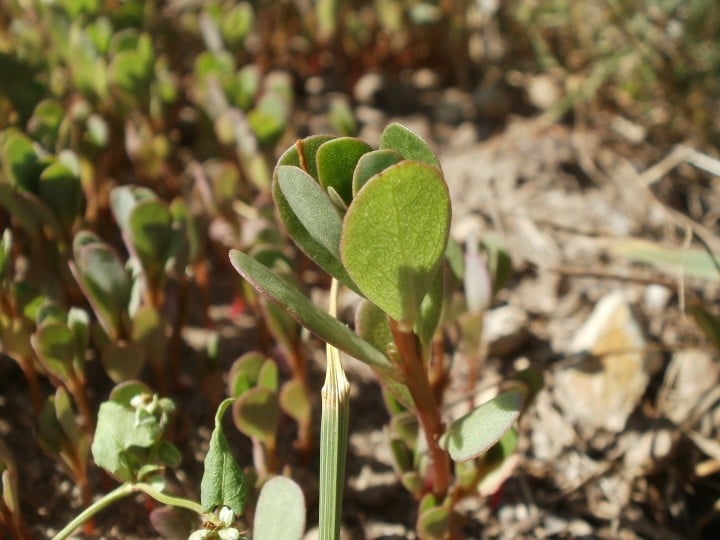 Common Purslane has its origins in North Africa, the Middle East, and the Indian subcontinent and has since spread to North America and Europe. The plant grows to 40 centimeters with smooth reddish stems.

Their leaves, clustered at the stem joints or the ends, can be alternate or opposite. The plant is a fast-growing herbaceous weed but is rich in nutritional value thanks to a high content of omega-3 fatty acids. 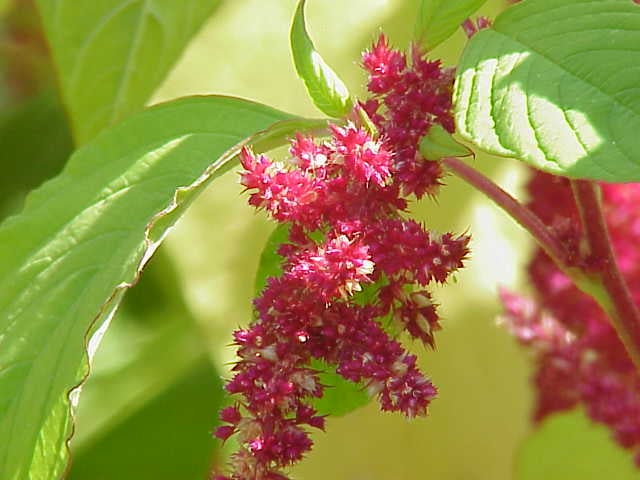 Pigweed is the common name for a group of weeds numbering about 70 in the United States and many parts of the world. Only specific varieties have reddish stems.

Pigweeds grow at a fast pace and tend to colonize an area. Their leaves are alternate and oval to diamond in shape.

Besides being ornamental and generally referred to as weeds, several pigweed species have edible leaves, stems, and seeds. 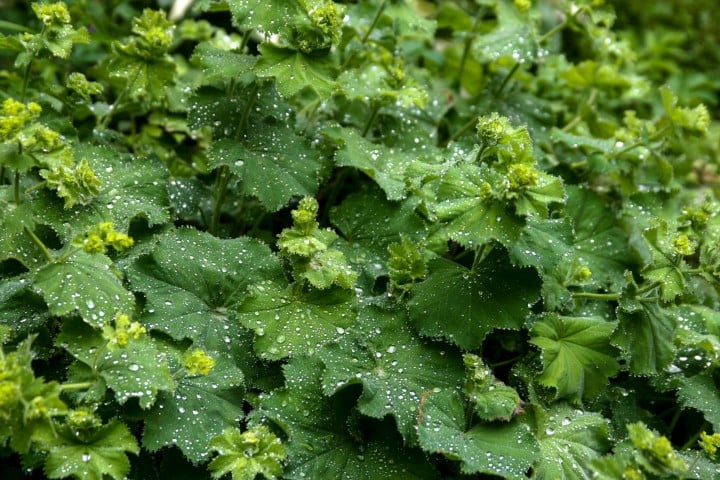 Lady’s Mantle is a herbaceous perennial plant native to Eastern Europe. Its hairy, palmate leaves are clumpy, and the plant can grow to 20 centimeters.

The plant is irresistibly beautiful in sunny regions because of its reddish stems. It can self-seed and also tolerates a wide range of soils.

During early summer, Lady’s Mantle unleashes green-yellow flowers, adding to its beauty. Medieval alchemists perceived the plant as medicinal and used it to treat women’s ailments. 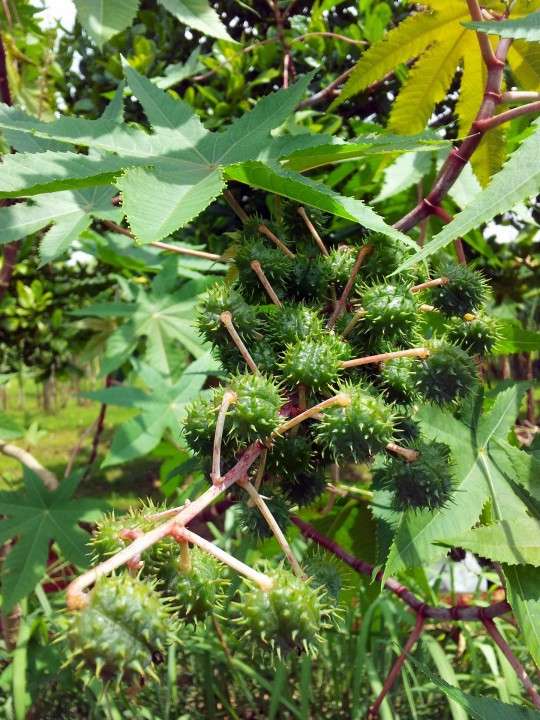 The castor bean is another exotic addition to your backyard or garden. The plant is native to East Africa, specifically the tropical regions of Ethiopia.

However, it has since naturalized in other tropical and subtropical parts of the world, such as the Southwestern US. The evergreen herbaceous perennial packs red stems and green leaves growing to 40 feet tall with woody stems in later years.

Sow the castor seeds directly in the soil in late spring, or start them off six to eight weeks before the average last frost.

Castor bean is grown for its oil used in making cosmetics and lubricants. The plant also produces a poisonous seed used for making rat poison. 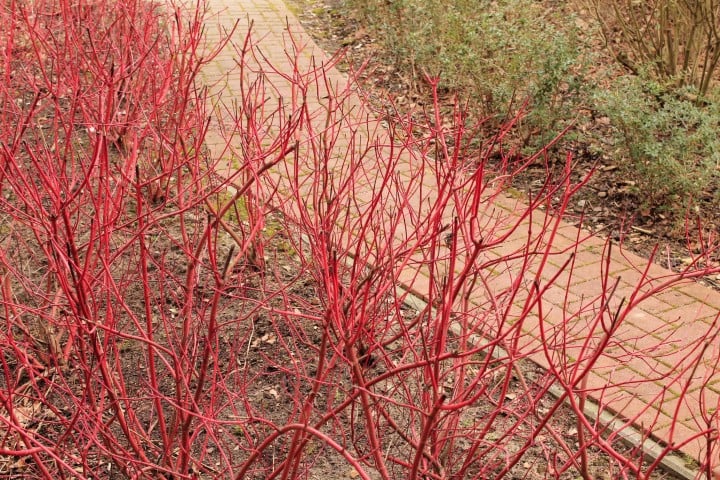 Among the many species of the dogwood plant, Red Osier is the most widespread in the United States.

The plant grows from 3 to 9 ft tall, forming an umbrella cluster of white flowers, which eventually turn into pea-sized white berries. Its leaves are oval-shaped with slightly red edges.

Red Osier thrives best in the wetlands. Its branches and twigs are dark red. However, some species lack dark red coloration when grown under a shade.

Over centuries humans have found the dogwood plant useful in basketry, farm implements, and weaving shuttles. 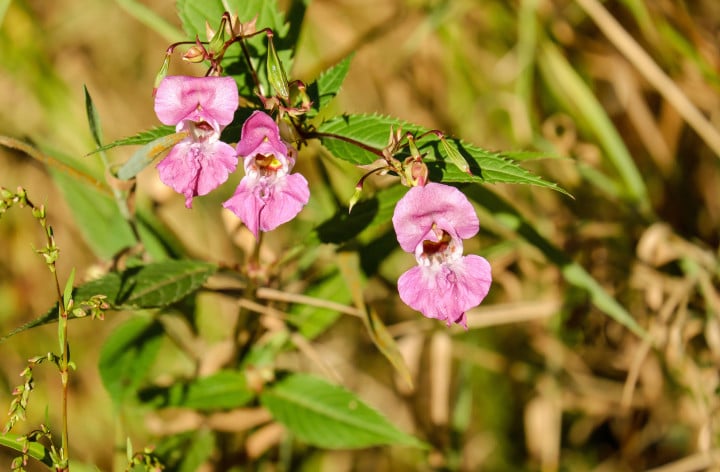 As its name suggests, Himalayan Balsam is a large annual ornamental plant native to the Himalayas.

However, thanks to humans, the plant has scattered across the Northern Hemisphere and is one of the most commonly known invasive weed species.

It grows up to 6 feet with green to red stems that harden when mature. It forms white to pink blooms with a hooded shape.

The plant is highly adaptable to new environments and spreads quickly. Check with your local agriculture office to know the legality of growing this plant in your area. 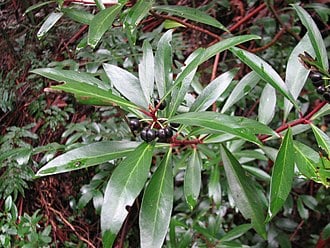 Mountain pepper is native to the Woodlands and temperate regions of Australia. It is a dense evergreen shrub with medium-sized red stems.

The plant grows about 4 to 6 feet and thrives best in moist shady areas. Gardeners have found its berries useful in making spicy condiments. 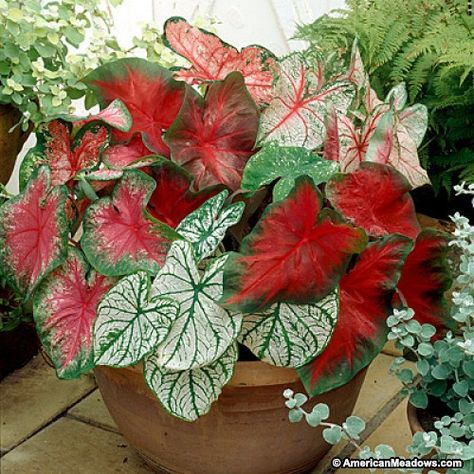 Fancy leaf caladiums are grown as subtropical and tropical plants both indoors and outdoors. They are native to South and Central American rainforests.

The leaves retain their color throughout summer until mid-fall.

Also Read:
Do Hibiscus Come Back Every Year?

The standard varieties include fire chief and red flash. The red flash variety has beautiful red stems and can be an exotic addition to your garden. 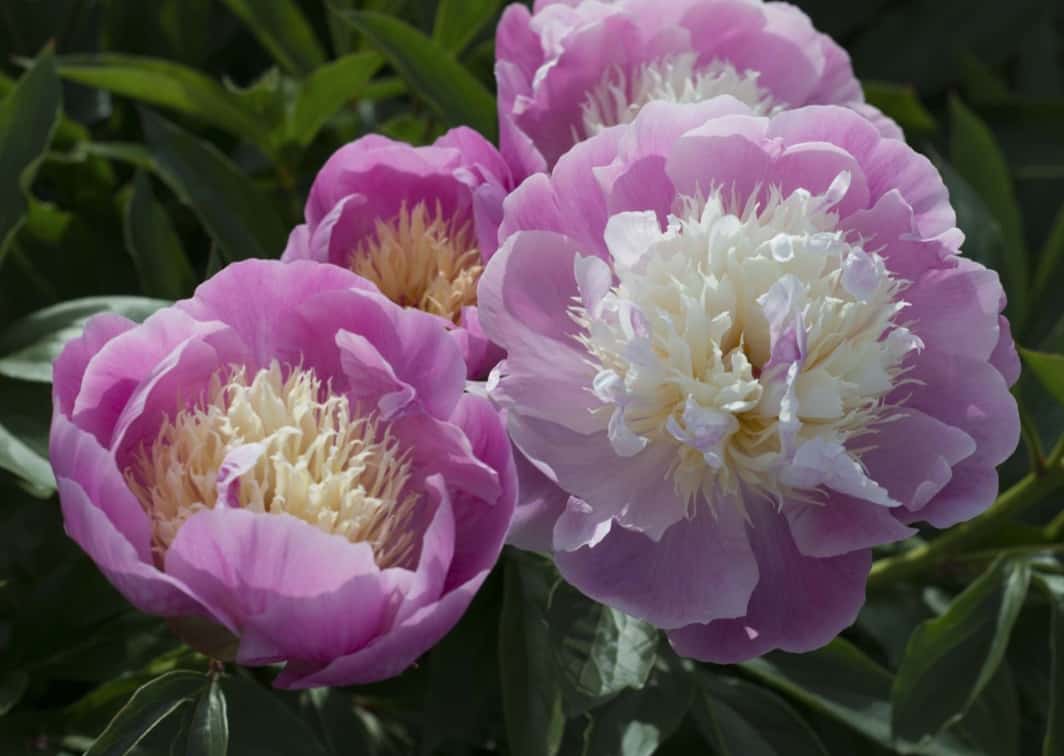 Among the many plants that have red stems is the Peony. It is native to North America, Europe, and Asia. There are over 30 existing species of the plant.

Peonies are mostly herbaceous and perennial, growing to a height of 0.25 to 1 meter. They can be easily recognized with their blooms and deeply lobed leaves.

The flowers range from white, pink, red, and yellow, with a short blooming season. 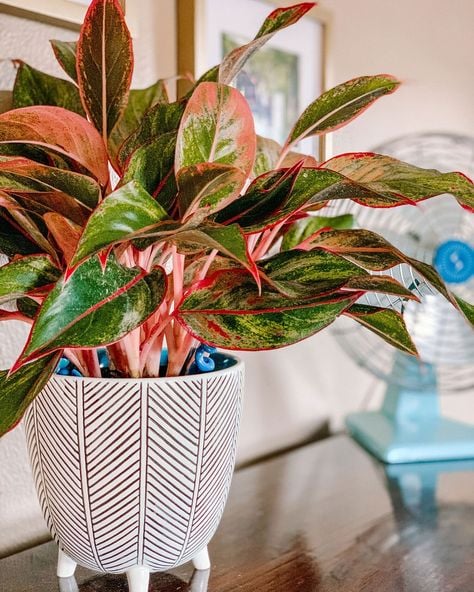 Chinese Evergreen originates from the subtropical forests of Southeast Asia.

The plant packs green and red variegated leaves. The leaves are broad and elliptic with several shades.

Chinese Evergreen grows 2 -3 feet tall indoors with proper care. Several hybrids of the plant exist, with some having red color stems that contrast well with your decor. 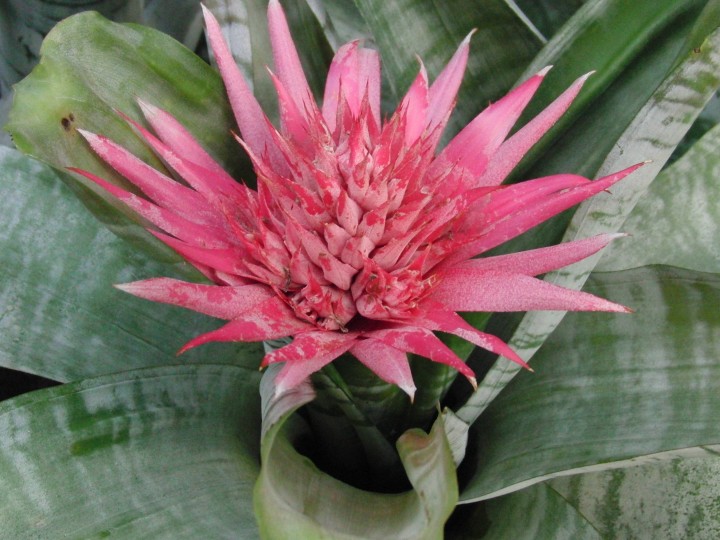 Aechmea triticina is an evergreen perennial endemic to Eastern Brazil. The plant is part of the genus Aechmea, which contains over 280 species.

Its growing height is 10-30 centimeters. The leaves are simple and basal, with serrate margins embedded on red stems. 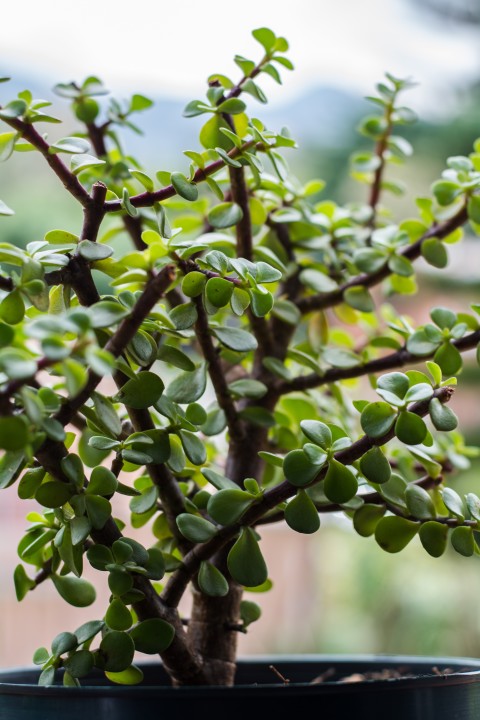 Elephant bush has its origins in South Africa. It’s a succulent plant with a woody stem and green leaves.

The plant is low maintenance and can quickly grow as a seasonal accent plant. Common names include dwarf jade, spekboom, and pork bush.

Elephant Bush is semi-evergreen, with its stems turning brown when mature. The plant’s foliage is edible and always eaten in salads and soups in parts of South Africa.

It is also used traditionally as a medicine to cure ailments. The plant can be a respite for wild animals due to its succulent nature during droughts. 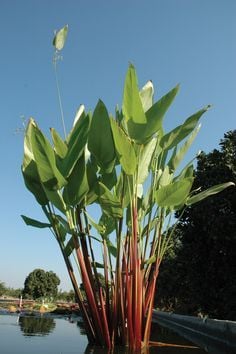 The plant is perennial and grows to a height of 2.4 – 3 meters. The stems are solid red, with some species having red-striped variations. 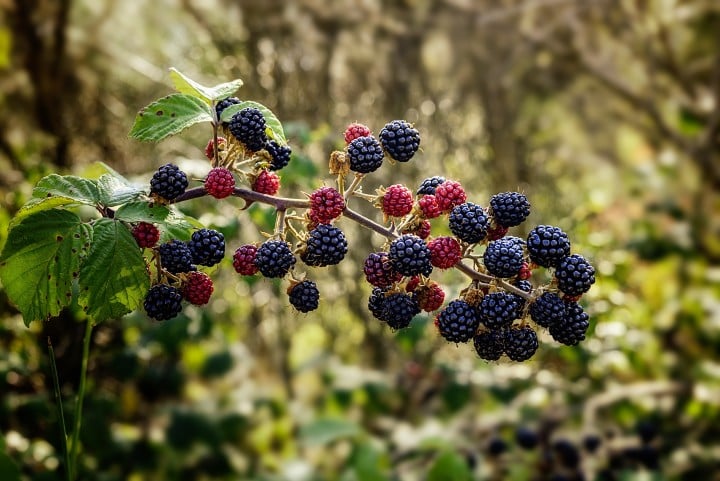 Wineberry is native to the Asian continent, particularly Korea, China, and Japan. Besides Asia, the plant has been naturalized in other parts of the world, such as North America and Europe.

Wineberry has red stems with green leaves and grows up to 3 meters. The plant produces ½-inch-edible berries that turn crimson when ripe. 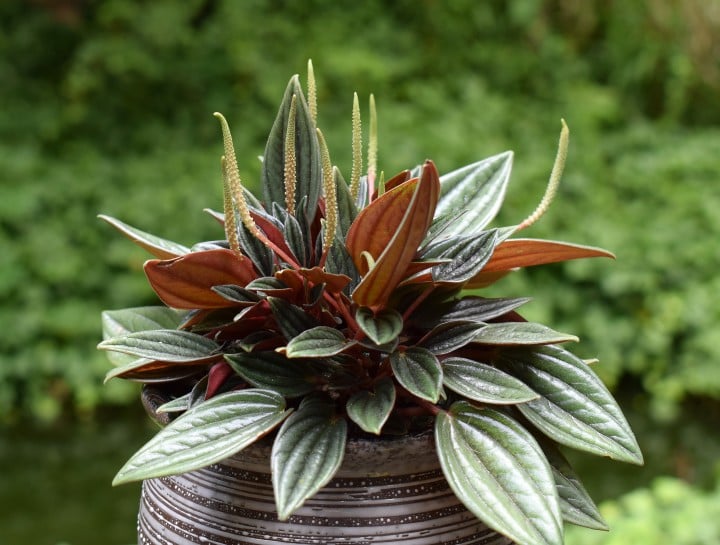 Red tree peperomia is one of the 1000 species of the peperomia genus found worldwide in subtropical and tropical regions.

Besides the large population of the plant in South America and Central America, the plant also inhabits Southern Asia, Africa, and Oceania.

The plant is an evergreen perennial with an upright growing habit, with the branches growing outwards. Its narrow stems are reddish-green to dark red with green leaves.

Also Read:
Do Rabbits Eat Tomato Plants And How To Repel Them?

The plant is ornamental and grows best in bright light and acidic soils with minimal watering. 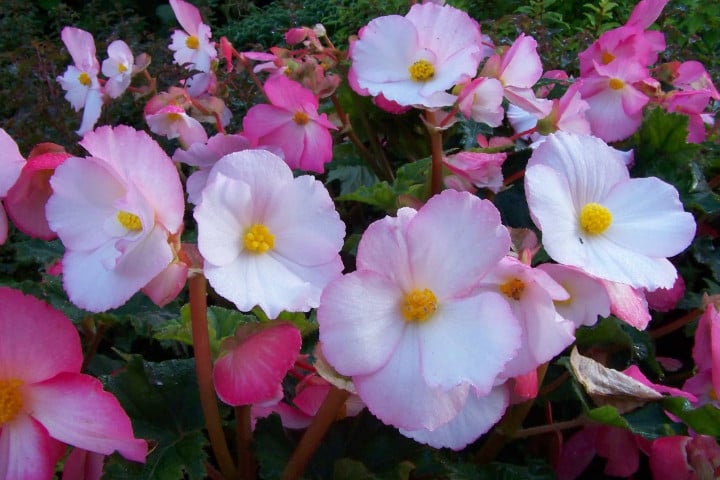 Red-stemmed Begonia is a herbaceous perennial native to China. It is commonly referred to as hardy begonia due to its ability to tolerate winter conditions. The plant typically forms a bushy mound of foliage on branching stems when mature.

The leaves are large and ovate, varying from red to green on red stems. You could grow the plant both indoors and outdoors during summer.

It also grows well as a garden perennial in hostile environments. 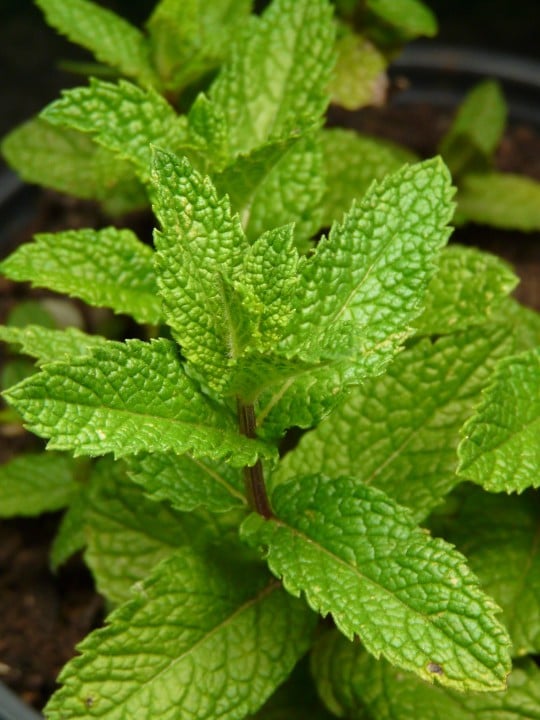 Native to southern and western Europe, the Red Stem apple mint is a herbaceous perennial in the Lamiaceae family. The plant grows upright to 24 inches and has rhizomes that spread to form the perfect ground cover.

The plant tends to colonize quickly, taking over an entire garden. You will love its aroma, which resembles a fusion of spearmint and peppermint.

The plant has soft green leaves with red stems. Their purple flowers attract bees and butterflies.

Gardeners have incorporated the plant in fruit salads, teas, and pies. 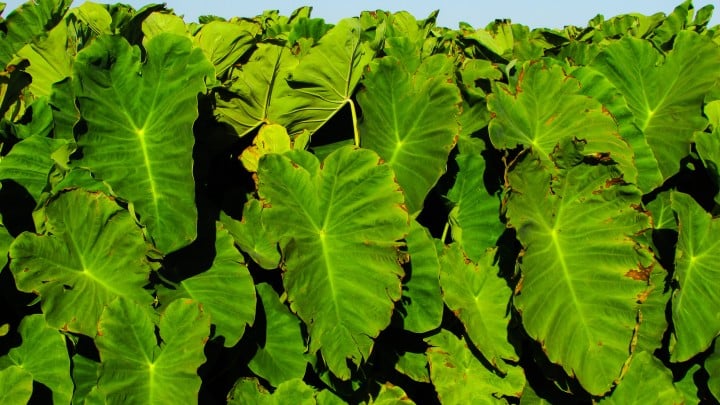 The Red Stemmed Taro, also known as Cranberry Taro, is native to Eastern Asia. It’s one of the few varieties with red stems, green leaves, and red veins.

The plant is a perennial with large evergreen heart-shaped leaves. Their blossoms are yellowish-green, making them a favorite ornamental plant for your landscape.

Esculenta is Latin for edible and means the plant is good to eat. Grow the plant with moist, rich soils in partial shade for the best results. 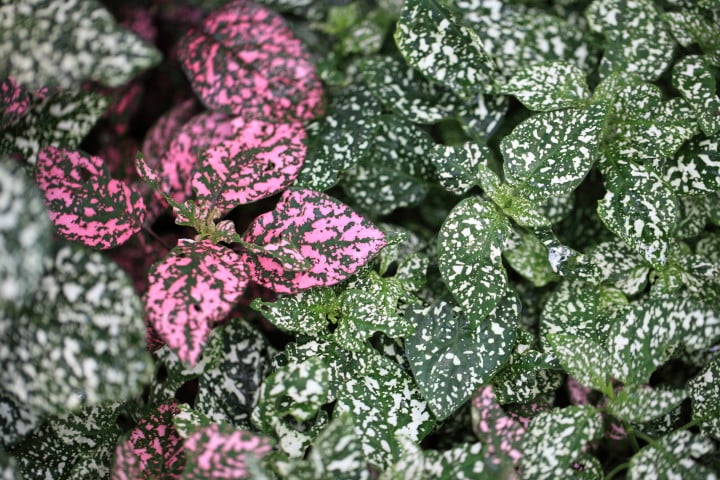 Polka Dot stems are red with green leaves and pink spots. You’ll love it as an annual outdoor plant and a border brightener best grown in containers.

There you go with our complete list of red-stemmed plants that can brighten up your indoor or outdoor living space.

Some of the options also double up as edible plants. However, you want to be aware of the species unsuitable for growing around children and pets.

We hope you will spruce up your home with these remarkable plants.

Also Read:
Overwatered Peace Lily Symptoms And How To Revive