Weeds are unwanted plants that are usually non-native. They spread across pretty quickly, often denying water and nutrient resources to the native plants.

Typically, there are multiple ways by which weeds spread— wind, water, and animals. They usually do so via seeds and spores.

If that was not enough, there are weeds that humans are guilty of spreading. These weeds stick or hook to our clothing, dirty tools, machinery, or pet animals, spreading far and wide.

The funny part is that we often aren’t aware of carrying them around. The weed seeds that stick to your clothes are commonly referred to as hitchhikers.

The other fun part is that they know how to hold good on our clothing, making them travel wide. Here is a list of the weed hitchhikers.

Also Read:
Plants And Weeds That Look Like Wheat

Weeds spread by people are not only challenging to contain but costly.

They fall into various categories ranging from herbaceous to woody plants. Let’s take a look at some of them 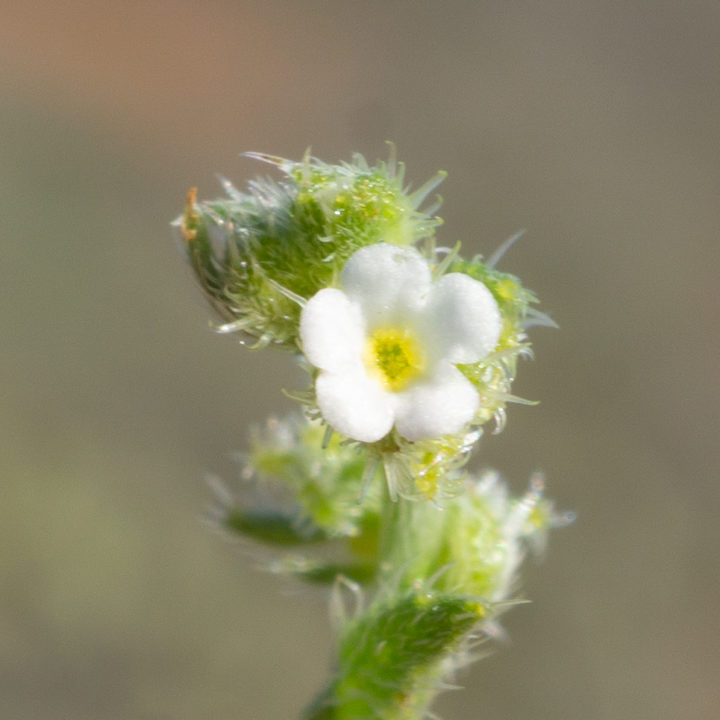 Palmer’s grappling hook is a wild native plant found on sand slopes, especially in the desert regions of California, Arizona, and Baja -Mexico.

You will find it hard to notice because of its tiny nature. The weed has haired pods that stubbornly cling to your socks.

The plant grows 30cm tall. Its stems and leaves are herbaceous and erect but sometimes spreading. You will also notice hooked white hair covering the leaves and stems.

The leaves are generally lance-shaped with rolling edges. Palmer bears hairy green fruit from tiny white flowers that emerge from the leaf axils.

Your socks play a significant role in distributing the seeds of Palmer’s grappling hook to other places for future germination.

Also Read:
What Animals Eat Lilies And How To Deter Them? 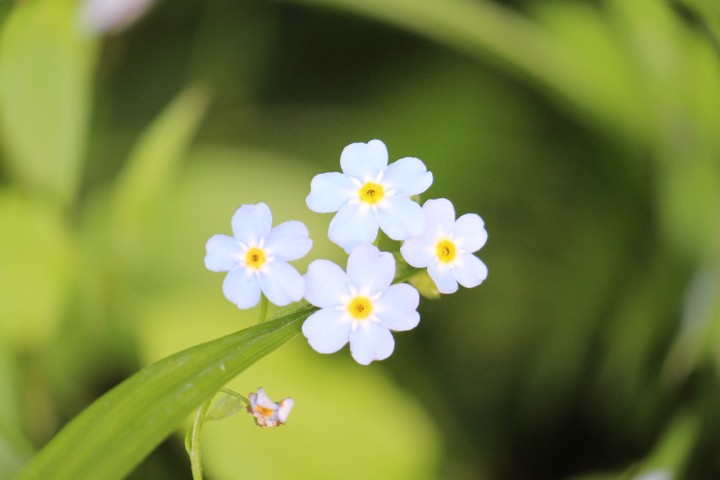 Hedge Parsley is highly invasive and can survive in a range of growing conditions. It grows aggressively, producing bur-like seeds that stick to clothing.

The weed is a native to Southern Europe and has found a home in several parts of the US. Familiar places you will find the weed growing are the edges of forests, roadsides, and gardens.

The plant grows to a height of 61cm. Its flowers are small, white, and clustered with fern-like leaves, with narrow, rounded stems.

Hedge Parsley leaves and stems are also covered with tiny white hairs. Get rid of the weed by pulling it from your garden, or use a commercial herbicide.

You can also mow the weeds early before the seeds develop to suppress them. If you have livestock, allow the animals to graze them before flowering. 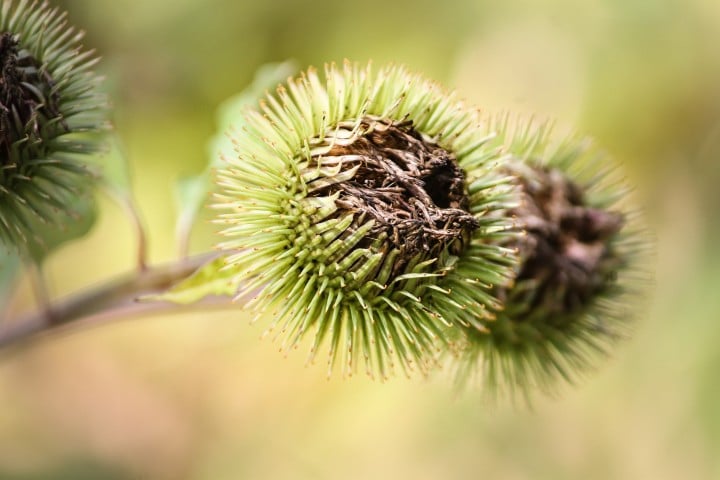 Common burdock is the other weed that likes to catch a ride on people’s clothing spreading long distances. It’s a nuisance plant growing in pastures and degraded places in many parts of the US.

You should find it easy to identify because of its large dark green leaves that appear oval to triangular. The upper leaf surface is hairy, while the lower surface is pale green and wooly.

The weeds are not only difficult to eradicate but also toxic. Some people experience allergic reactions when they come into contact with their skin.

Common Burdock can cause eye infections and skin problems in livestock. To prevent it from spreading, hand pull or dig it out of the soil.

You want to do mowing before bloom time to avoid spreading the seeds. Some herbicides recommended for control are glyphosate, 2,4-D, and picloram. 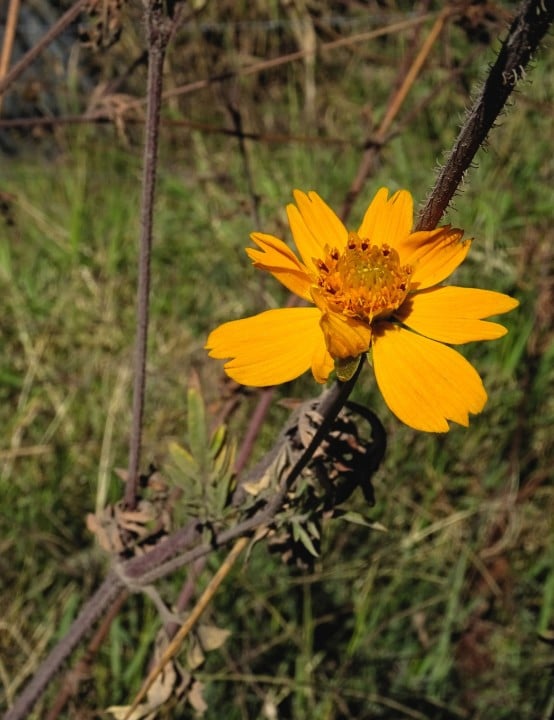 Beggarticks in the aster family are annoying weeds that will wreak havoc on your garden. They are found across the entire United States particularly around disturbed places.

Also Read:
Are Venus Fly Traps Edible And How To Grow Them?

The plants snowball, crowding out native plants. It has dull green leaves that have sharp teeth at the edges. Their flowers are bright yellow and resemble daisies.

The stems are slender and leafy, growing up to 5 feet. Beggarticks have sticky fish-like seeds that will attach to anything, including your socks or your pets’ fur.

This is one of its adaptation methods to ensure it spreads far and wide— hooking itself on the host who carries it along with them.

Get rid of beggarticks from your garden through frequent mowing. You could also uproot them from moist soil. If they prove to be stubborn, use a herbicide to eradicate them. 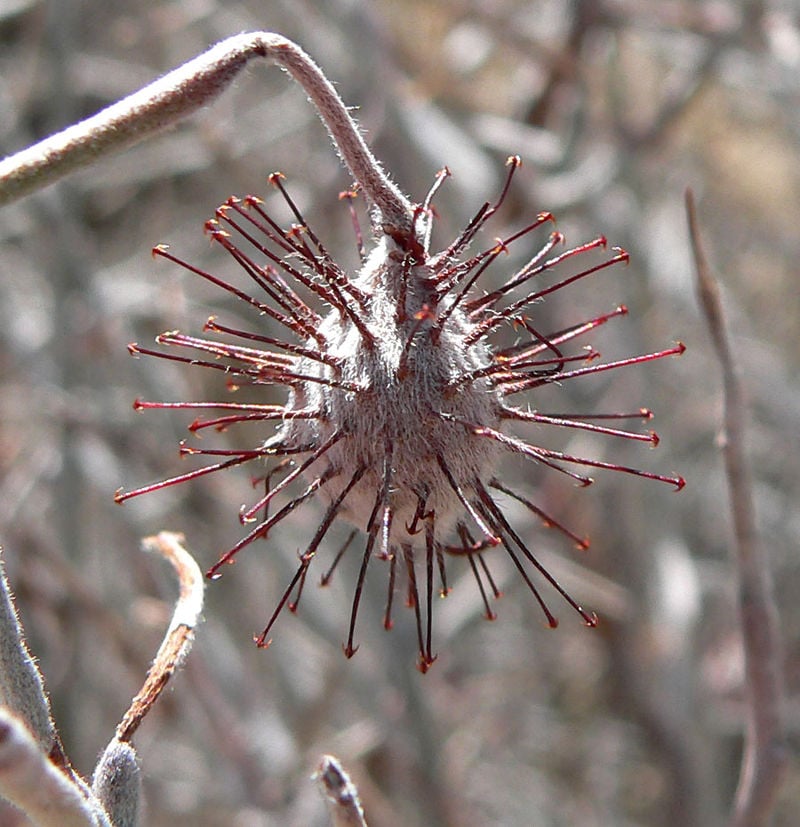 The other hitchhiker you want to know about is the Krameria. It’s a purple-flowered shrub growing in the Colorado desert, Southeastern California.

The plant is drought resistant and low-growing, reaching a 0.6 -0.9m. The leaves are ovate and gray, blending in with the stems.

Krameria fruits resemble the miniature version of the legendary Uncarina of Madagascar. The fruits have radiating spines containing several barbs which appear like a tiny harpoon.

These barbs are spread across the upper part of each spine. The barbs or spines easily stick to unsuspecting hosts such as humans wearing loose apparel, moving along with them. 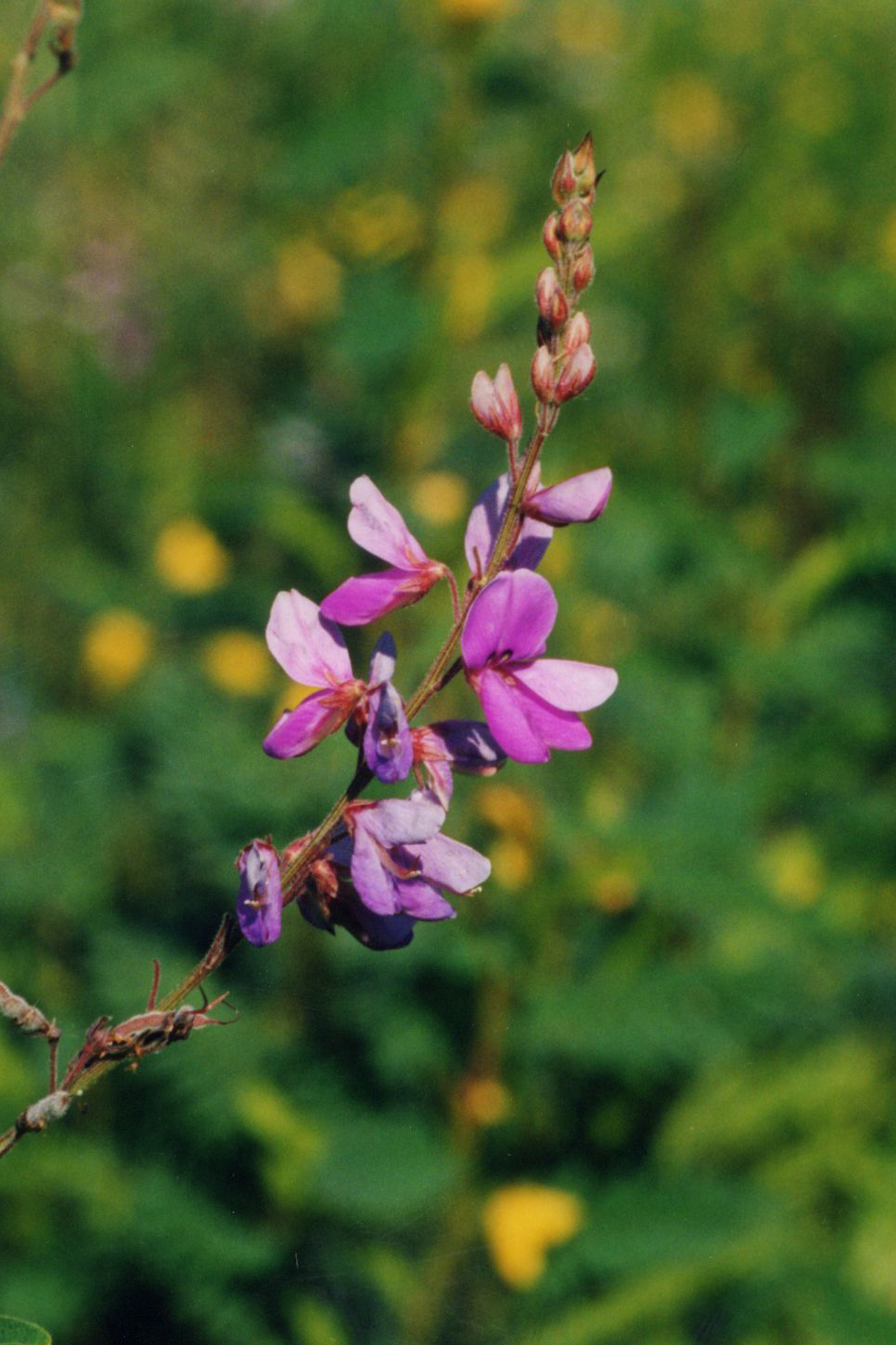 Beggar’s lice are next up on the list. The plant has several other names such as tick clover and the hitchhiker. It’s a flowering plant in the family Fabaceae.

It has several other species that gardeners and botanists find challenging to identify. Identification is based on a close analysis of their seed pods— some species are considered weeds.

The leaves are arranged in leaflets of three, giving it the name trefoils. Beggar’s lice grow to a height of more than 3 feet tall.

Their hairy seed pods stick to clothing and fur, giving it the name beggar’s lice.

Also Read:
Too Much Miracle Gro: What Happens To Plants And How To Fix

Some of the plant species are used in agriculture to create livestock fodder, in Chinese Medicines, and to repel insects. 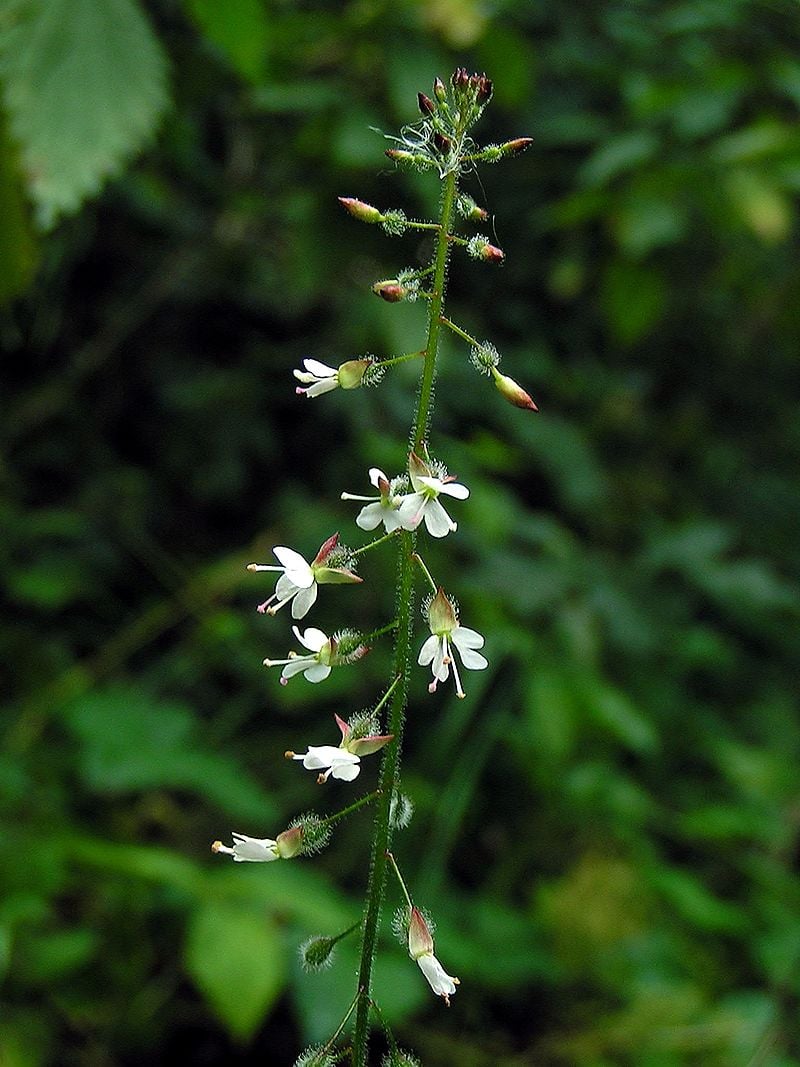 Enchanter’s nightshade belongs to the willowherb family. Apart from gardens, other places you are likely to find the plant are at the base of old walls, woodlands, and hedgerows.

Its leaves grow opposite each other, and are oval and rounded at the base. Their pink-white flowers are arranged in loose clusters and mostly appear between June and August.

Enchanter’s nightshade is problematic due to its persistent climbing habit. Most yard owners consider it a weed.

The surface of their fruits is covered in bristles that contain hooks. This makes them attach to clothing and animals for dispersal. 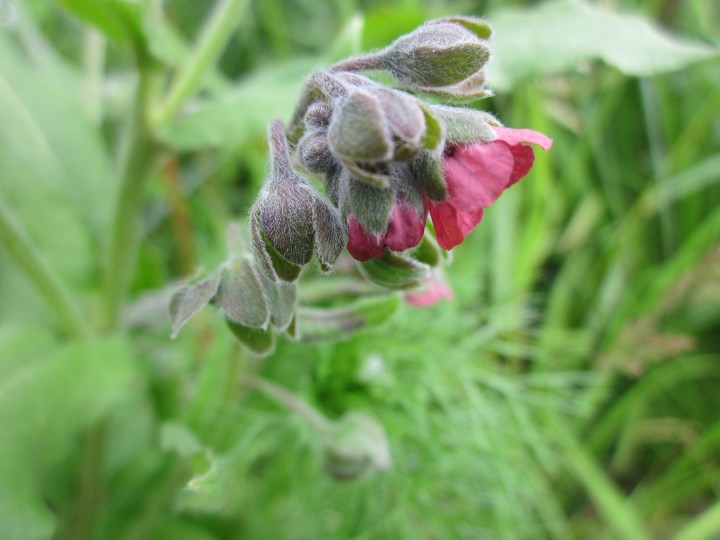 Houndstongue weed does not only stick to your clothes, but is poisonous to your livestock as well. You don’t want to keep it around your garden for safety reasons.

Also Read:
Will Cayenne Pepper Hurt Plants And How To Apply?

It’s an invasive plant found in several areas of the continental US. It’s easy to identify this obnoxious weed once you know its cycle.

They appear as rosettes with oblong leaves in their first year. The plants grow four feet tall in their second year, producing flowers. 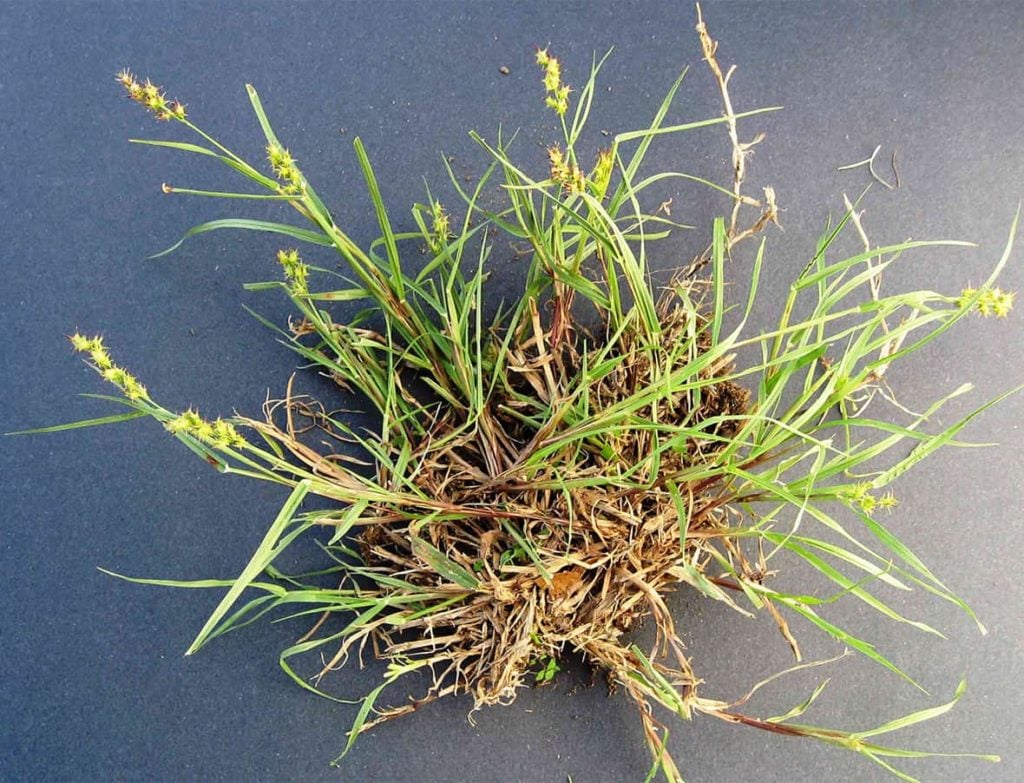 Sandbur is a pesky weed found in patchy lawns and pasturelands. It loves dry, sandy soil.

It’s an annual weed with species that can grow up to 50cm high. The plant is grassy, which makes it blend easily with turfgrass.

It spreads on your lawn, forming a carpet containing flat blades. The flat blades have hairy ligules that usually bear burs at the end and carry the seed.

Their seed pods not only stick to your clothing and the fur of animals but skin as well. You can pull off the plants by hand or mow them frequently to control the weed infestation.

Also Read:
How to Get Rid of Guinea Pig Urine Smell

You also want to fertilize your lawn during fall to allow it to produce a thick mat that will choke other weed seedlings. You can also use pre-emergent herbicides to prevent its seeds from germinating.

You now have the list of weeds that hitchhike. Next time you take that garden or nature hike, you want to be on the lookout for them to avoid being an agent of dispersal.